There was no singing of “Somewhere over the Rainbow” in this version. In fact, there was no singing at all. “Talkies” as they were known in the movie business, hadn’t been perfected yet. This was a silent movie and compared to the musical film that was released fifteen years later in 1939, this version, as were other early adaptations of Baum’s book, remains somewhat of an enigma.

When Baum’s book came out in 1900 it became an instant best seller. Two years later, under Baum’s direction a play based on the book was set to music and opened in Chicago. The title was shortened and the story was altered slightly. The main difference between the book and the stage adaptation, however, was an obvious one. Baum wrote the book specifically for children, while the play was geared for adults.

Due to the popularity of the stage version, a 13-minute live action short was released that mostly confused viewers familiar with the book. The first full-length movie version then in 1925 was also based on the play and differed quite a bit from Baum’s original story

In the film, Dorothy and three farmhands arrive in Oz after a tornado sweeps them away. The Wizard proclaims Dorothy is the long lost Princess of Oz, but the Prime Minister, named Kruel, wants nothing to do with her. The prince, however, named Kynd, welcomes the princess’s return and accuses the farmhands of kidnapping her.

To thwart the Prince’s soldiers, the farmhands, who are madly in love with Dorothy, dress up in disguise: one as a scarecrow and one in sheets of tin. The two men are eventually caught but the third farmhand dons a lion’s costume, scares the guards, and helps the others escape. The Tin Man eventually sides with Kruel and the whole tangled affair leads to a showdown in a tower between the Scarecrow and the Tin Man, both of whom lose Dorothy’s affections to the handsome prince.

The movie ends as the 1939 version does, when Dorothy wakes up from a dream. 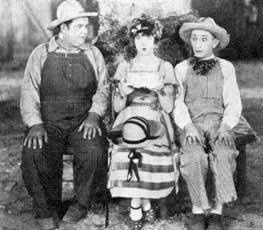 “‘The Wizard of Oz’ goes way beyond even our wildest expectations,” proclaimed  I.E. Chadwick, president of Chadwick pictures, upon its release. “A thing of great beauty and fantasy. Marvelously entertaining. A knockout!”

The movie was one of a series of films that Chadwick’s studio produced. “Each production an achievement,” Chadwick proudly announced.

The movie’s top billing went to a popular comedian named Larry Semon, who played the scarecrow and directed the film. His real life wife, Dorothy Dwan, played Dorothy. The movie was advertised as a comedy and it did well at first.  ‘It’s a Whiz!” was one excited description. But it didn’t last. By the time the Garland version appeared, the silent film had long since been forgotten.

Yet, the movie may best be remembered for the introduction of the larger-than-life figure who played The Tin Man. “Large” in this instance, referring to his outwardly size. The relative newcomer’s portliness would eventually become his trademark, but for this role, it was more a liability. Even a fellow actor questioned why a man of his girth would – or even could – wear a suit made of tin. “What are you going to do about the costume?” he asked.

Oliver Hardy as it turned out would go on to have greater success as the bigger half, literally, of the comedic duo, Laurel and Hardy.

But the most glaring mistake of the early film may be the absence of many of Baum’s most enduring characters, including two that featured prominently in Garland’s version: the Wicked Witch and Dorothy’s little dog, Toto.

In fact, in the stage version, Toto was replaced by a cow named Imogene. 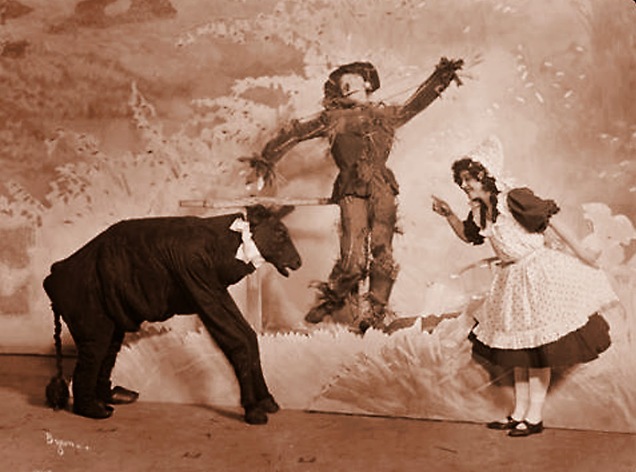