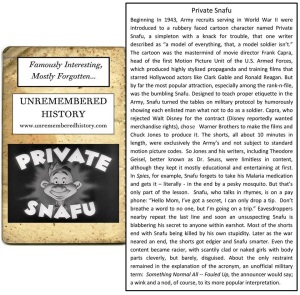 Beginning In 1943, Army recruits in World War II were introduced to a rubbery faced cartoon character named Private Snafu, a simpleton with a knack for trouble, that one writer described as “a model of everything, that, a model soldier isn’t.”

The cartoon was the mastermind of movie director Frank Capra, head of the first Motion Picture Unit of the U.S. Armed Forces, which produced highly stylized propaganda and training films that starred Hollywood actors like Clark Gable and Ronald Reagan.

But by far the most popular attraction, especially among the rank-n-file, was the bumbling Snafu.

Designed to teach proper etiquette in the Army, Snafu turned the tables on military protocol by humorously showing each enlisted man what not to do as a soldier.

The shorts, all about 10 minutes in length, were exclusively the Army’s and not subject to standard motion picture codes.  So Jones and his writers, including Theodore Geisel, better known as Dr. Seuss, were limitless in content, although they kept it mostly educational and entertaining at first.

In Spies, for example, Snafu forgets to take his Malaria medication and gets it – literally – in the end by a pesky mosquito. But that’s only part of the lesson.  Snafu, who talks in rhymes, is on a pay phone: “Hello Mom, I’ve got a secret, I can only drop a tip.  Don’t breathe a word to no one, but I’m going on a trip.” Eavesdroppers nearby, possibly spies, repeat the last line and soon an unsuspecting Snafu is blabbering his secret to anyone within earshot. Most of the shorts end with Snafu being killed by his own stupidity.

Later as the war neared an end, the shorts got edgier and Snafu smarter. Even the content became racier, with scantily clad or naked girls with body parts cleverly, but barely, disguised. About the only restraint remained in the explanation of the acronym, an unofficial military term:  Something Normal All — Fouled Up, the announcer would say; a wink and a nod, of course, to its more popular interpretation. 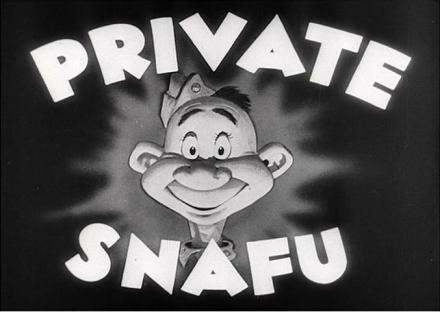