When Christmas Interrupted the War 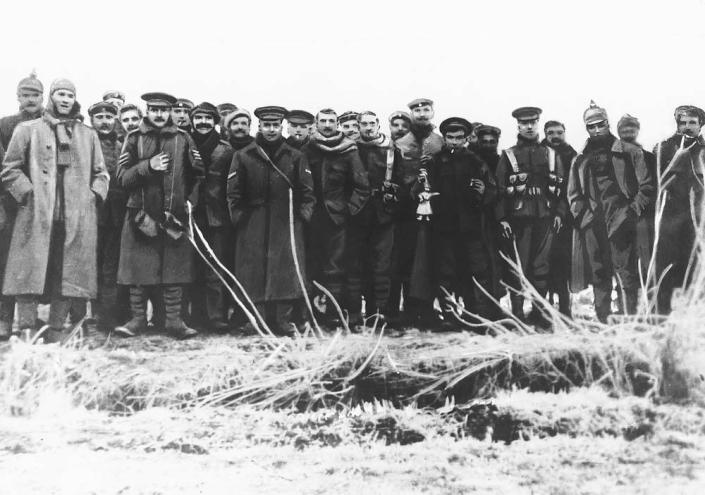 At the first light of dawn on Christmas Day, 1914, only five months after the outbreak of war in Europe, a group of weary German soldiers emerged from their trenches and approached the Allied forces across an area between them known as no-man’s-land.

“Merry Christmas,” the Germans called out in their enemies native tongue.

At first, the Allied soldiers feared it was a trick, but seeing the Germans unarmed they climbed out of their trenches and shook hands with the enemy soldiers.

“I think I have seen today one of the most extraordinary sights that anyone has ever seen,” British Captain A.D. Chater later wrote to his mother. “We were just going to fire on them when we saw they had no rifles, so one of our men went to meet them and in about two minutes the ground between the two lines of trenches was swarming with men and officers of both sides, shaking hands and wishing each other a happy Christmas.”

The men exchanged presents of cigarettes and rations and sang carols and songs. “First the Germans would sing one of their carols and then we would sing one of ours,” recalled another British soldier named Stephen Lovell. “When we started up “O Come, All Ye Faithful,” the Germans immediately joined in singing the same hymn to the Latin words Adeste Fideles. And I thought, well, this is a most extraordinary thing — two nations singing the same carol in the middle of a war.” There was even a documented case of soldiers from opposing sides playing a good-natured game of soccer.

Captain Chater quickly realized his adversaries held the same concerns and thoughts as his comrades. “From what I gathered most of them would be glad to get home again as we should,” he wrote. “We exchanged cigarettes and autographs, and some more people took photos.”

On the German side, sentiments were similar. “What I had still believed to be madness several hours ago I could see now with my own eyes,” recounted German soldier Josef Wenzl. “One Englishman, who was joined soon by another, came towards us until he was more than halfway towards our trenches — by which point some of our people had already approached them. And so Bavarians and English, until then the greatest of enemies, shook hands, talked and exchanged items.”

Some soldiers used this short-lived ceasefire for a more somber task: the retrieval of the bodies of fellow combatants who had fallen within the no-man’s land between the lines.

But the fighting would continue once the brief respite ended. Each man knew it. They faced a court martial or worse if they refused.

“This extraordinary truce has been quite impromptu,” Chater’s letter continued. “There was no previous arrangement and of course it had been decided that there was not to be any cessation of hostilities.” Chater jokingly suggested the goodwill may continue after a week. “We are, at any rate having another truce on New Year’s Day, as the Germans want to see how the photos come out!”

Elsewhere the war raged on.  Even on that day of December 25 1914, a reported 149 British troops were killed by enemy fire.

On one battlefield  however, there was a “Christmas truce,” as it is often called.

A single star stood still in the sky directly above,” Wenzl recalled about that day, “and was interpreted by many as a special sign.”

(Some text reprinted from History.com “Christmas Truce of 1914”)