When the ‘Stache Ruled the Pool

In August and September of 1972, at the Summer Olympics in Munich, West Germany, American swimmer Mark Spitz did what no other Olympian had ever done up to that point, win more consecutive gold medals in a single games.

In this case, it was a “golden” seven.

It could have been only six.

Spitz was satisfied with his unprecedented six-for-six gold medal streak and considered bowing out of his last scheduled race, the 100m freestyle, after being edged by rival and current world record holder in the event Michael Wenden of Australia in both the prelims and the semis.

Sptiz thought a loss would tarnish his previous accomplishments. But his coach convinced him that since the 100m freestyle was the premier swimming event of the games, Wenden would be crowned the fastest swimmer in the world.

“There is no money in swimming like there are in other sports,” Spitz said about his record making accomplishments. “The medals don’t have much monetary value. I’ll hang them on the wall someplace.”

But Spitz’s fortunes would change.

After the games, Spitz became an instant celebrity and one of the first Olympians to profit off his success by picking up major product endorsements from swim trunk maker Speedo and razor king, Schick.

The latter thanks to that famous mustache, Spitz’s trademark. 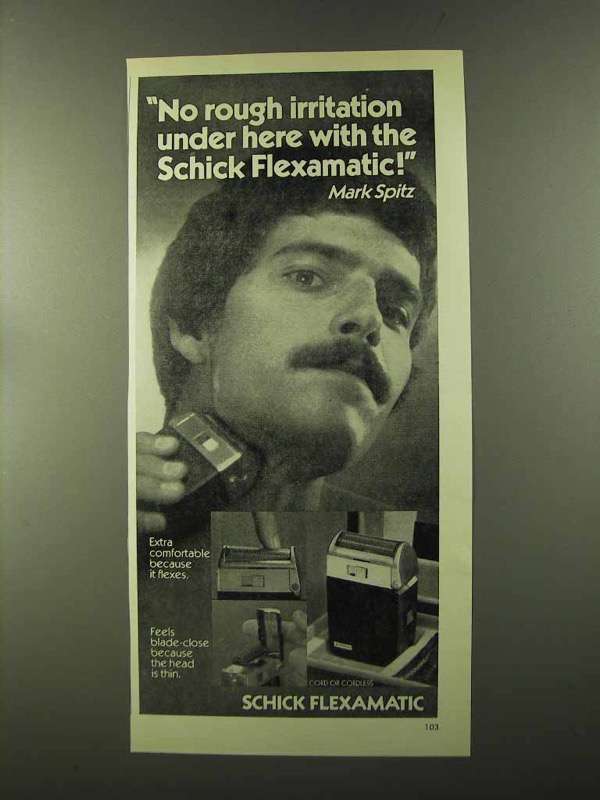 Spitz grew up in Honolulu Hawaii and became a competitive swimmer at an early age. He sported the mustache in college on a bet from a coach that he couldn’t grow one.

After the games, which were marred internationally by the Israeli hostage tragedy, the poster of Spitz sporting his mustache and seven gold medals around his neck became a best seller.

The ‘stache, however, was a source of curiosity and contention for other competitors.

Even the coach of the Russian team went so far as to ask Spitz if he thought his facial hair slowed him down. Spitz told him it actually streamlined water around his mouth, making him swim faster.  Today’s competitive swimmers would disagree, since they prefer no facial or body hair in general except perhaps on their heads which is usually covered by smooth swim caps. In Spitz’s era, swimmers didn’t wear caps on their heads.

Sptiz amount of gold won at a single games was finally broken by Michael Phelps at the Beijing Games in 2008.

But Phelps, who won 8 gold medals without breaking a world record in one event, gives Spitz a lasting distinction of besting the world record in every event he entered, even the seventh and final race of his swimming career, the 100m freestyle, the event he considered skipping.

“You can bet your ‘omph-pah’ horn or your last stein of Munich beer, or both, that it will be seven gold medals before the sun sets,” wrote UPI sports writer John G. Griffin on the day of that last race.