When “A Charlie Brown Christmas” was produced for television in 1965, Peanuts creator Charles Schulz had one specific, but important directive.  That the program be about something. Namely, he insisted, it be about the true spirit of Christmas. Otherwise, he said, “Why bother?

Of course, as we know now, Schulz had his way. Mostly lighthearted and inspirational, “A Charlie Brown Christmas” is punctuated by its infectious original music, a catchy tunes, and the now iconic symbol of recognition and hopefulness: a seemingly lifeless little tree.

The highlight of the special , however, is a moving scene in which the Linus character, blanket in hand, stands on a spotlighted stage and explains the true meaning of Christmas. It includes a biblical passage from the Book of Luke.

And there were in the same country shepherds abiding in the field, keeping watch over their flock by night. And, lo, the angel of the Lord came upon them, and the glory of the Lord shone round about them: and they were sore afraid. And the angel said unto them, Fear not: for, behold, I bring you good tidings of great joy, which shall be to all people. For unto you is born this day in the city of David a Savior, which is Christ the Lord. And this [shall be] a sign unto you; Ye shall find the babe wrapped in swaddling clothes, lying in a manger. And suddenly there was with the angel a multitude of the heavenly host praising God, and saying, Glory to God in the highest, and on earth peace, good will toward men.

Then like magic, Linus addresses someone specifically: “That’s what Christmas is all about, Charlie Brown.”

Linus’s words, like the special itself, has been charming audiences ever since.

Charming, however, was not the word CBS executives used when they first viewed the completed special. They hated it -– or just didn’t get it.  The pacing was off, they thought, and the music was different: classical in parts, jazzy in others.

They considered scraping it altogether, but were committed to the time slot and soft drink giant Coca-Cola, the sponsor of the program. “This is probably going to be the last [Peanuts special],” one executive chirped. “But we got it scheduled for next week, so we’ve got to air it.”

The producers of the special were deflated by the network’s initial reaction. “We thought we’d ruined Charlie Brown,”one exclaimed. Until then, the only controversy among the writers was whether or not to include the use of an actual biblical verse in an animated special.  Schulz again insisted. “If we don’t do it,” he said “who will.” Coca-Cola gave their blessing too.

Linus’s effective speech is also credited to the child actor who provided the voice. Before the special, Peanuts characters had only been heard in a Ford Commercial.  The producers wanted them all to be voiced by children.  Christopher Shea was only 8 years old at the time. He had the most innocent sounded voice and was tapped for the Linus character. His measured, straightforward reading is considered legendary. “It’s one of the most amazing moments ever in animation,” raved Peter Robbins, the original voice for Charlie Brown. Robbin’s voice was picked for Charlie Brown because it sounded “blah.”

Even though CBS thought it would only run for a year and be forgotten, once it was in the public consciousness, attitudes changed. Instantly, people began talking about it. The next year, the special won a Peabody award and an Emmy for Outstanding Christmas Programming. A lasting tribute to Charles Schulz original vision that it be about something – – something with a message.

One scene in particular is still considered, as a producer described it later, as “the most magical two minutes in all of TV animation.” 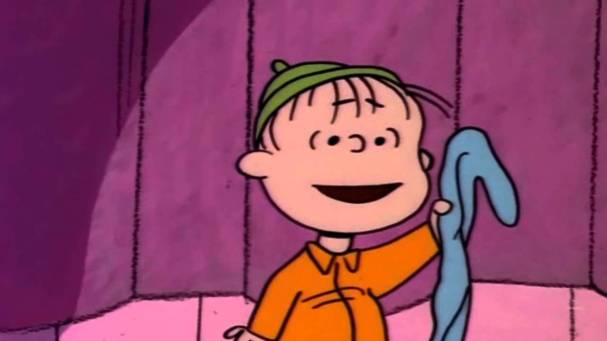