‘The Grinch’ Was Just One Highlight of the Dr. Seuss Songbook 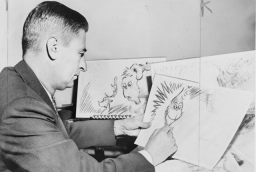 Theodor Seuss Geisel, better known as Dr. Seuss, wrote dozens of children’s books that still today reach bestseller’s lists and thrill a new generation of fans each and every year. However, his work as a songwriter is often overlooked, due in part to the success of his books. But when reminded, the songs penned by Seuss, are just as enduring and whimsical.

Seuss wrote the songs mostly for television animated specials. And if you know the shows, you know the songs.  For instance, in  The Cat in the Hat, a television short released in 1970, and based on his first children’s book of the same name, Geisel wrote several original songs including the bouncy, “The Gradunza”  (The old, moss-covered, three-handled family gradunza), the catchy “Cat, Hat” (Cat, hat, in French, chat, chapeau. In Spanish, el gato in a sombrero.),” and the playfully teasing, “Calculatus Eliminatus” (Calculatus eliminatus always helps an awful lot. The way to find a missing something is to find out where it’s not), all with Seuss’s clever wordplay and sing-song rhyme pattern . 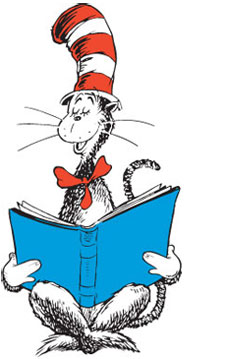 One song in particular, “I’m a Punk,” introduced such ridiculously pleasing locutions as crontunculous, gropulous, poobler, and schnunk. ” While everyone understands the meaning of punk, being a “schnunk” needed some explanation.  But when the Cat sings, “nobody, likes me, not one tiny hunk,” everyone gets the idea.

Some credit the Seuss writing style to a Life magazine article in 1956 that criticized children’s reading levels, specifically “primers” or textbooks with simplified words and phrases like “See Spot run” from the book series Fun with Dick and Jane.  Geisel was asked to write a story using a vocabulary list of just over 200 words.  He picked the first two words that rhymed, cat and hat, and went from there. It certainly wasn’t like any story in a textbook, that’s for sure, and critics praised “The Cat in the Hat” for its originality.

Several years later when Seuss wrote the lyrics for songs in his television specials, he seemed to relish the opportunity to ratchet up the silliness even more. Seuss’s words just seemed to work with music, oftentimes using traditional melodies, sometimes with an original score. The man credited with composing or arranging most of the music for Seuss is Dean Elliott, a Midwesterner from Wisconsin, who conducted orchestras for the Tom and Jerry shorts before hooking up with Seuss. Later Elliott worked with Bugs Bunny creator Chuck Jones. 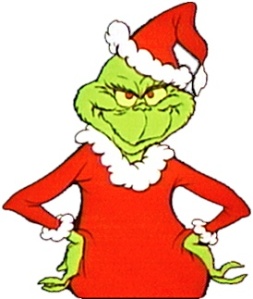 Seuss’s most popular song is one we hear every year around the holidays. In it, an unmissable deep voice groans about the Grinch,  a Seuss original, who has a “heart full of unwashed socks” and a “soul full of gunk.”

Written in 1966 for the TV special “How the Grinch Stole Christmas,” Seuss enlisted a voice actor named Thurl Ravenscroft to sing the lead on the song even though Boris Karloff was the voice of the Grinch in the special. Karloff reportedly could not sing and Ravenscroft was hired . But Ravencroft’s name was never listed among the credits and Karloff mistakenly got most of the acclaim.  Seuss was reportedly furious and apologized for the oversight. Ravenscroft was also the voice of Kellogg’s Tony the Tiger (They’re Great!).

“You’re a Mean One, Mr. Grinch,” is an unconventional Christmastime staple.  The song never mentions Christmas, but rather teases with crafty metaphors, comparisons and contradictions all designed to point out what an awful crank the Grinch – now a symbol of holiday grumpiness – can be.

You’re a mean one Mr. Grinch

You really are a heel.

You’re as cuddly as a cactus,

And as charming as an eel,

The song is instantly recognizable, charming and unmistakably Dr. Seuss.