Haddon Sundblom: The Man Behind the Classic Santa Look

In the 1930’s when soft drink giant Coca-Cola decided to celebrate the holiday season in their promotional ads, American aritst Haddon Sundblom created an image that still today is considered the definitive appearance of a modern day Santa Claus.

For Sundblom, achieving such lasting notoriety was not entirely unexpected. The popularity of Coca-Cola products made images that appeared in their ads cultural phenomenons. In 1930, when Coke introduced Christmas-themed ads, another artist named Fred Mizen did a painting that featured the world’s largest soda bar at the Famous Barr Co. in St Louis, Missouri. In it, Santa Claus, presumably a store Santa, is seen in the crowd drinking a Coke while children stand by his feet.

The painting  was interesting enough, just not memorable.

The next year, Coca-Cola wanted to portray Santa again. Something more refined. Something that focused on the man rather than the crowd.

Sundblom was asked to give the image a go.

Based on Clement Clark Moore’s descriptions of St. Nick in “’Twas the Night Before Christmas,” Sundblom’s Santa Claus emphasized the rosy cheeks and snow white beard along with the now familiar suit and hat. A wide leather belt and brown boots completed the look.

Santa is seen holding a Coca-Cola bottle like in the previous ads, but this time his face looked jolly, and his beard real. Even the “little round belly” was believable. The strikingly red and white suit in the new ad some claim was a request by Coke to emphasis the brands colors.

Sundblom’s Santa, however, was merely improving on an image already made famous nearly a decade earlier by illustrator Thomas Nast in Harper’s Weekly.

Nast genius was presenting Santa as a human figure, rather than a mysterious one. Santa had the suit (albeit drab) and a beard, but little detail. Most of his drawings were in simple ink and later colorized for Christmas cards. 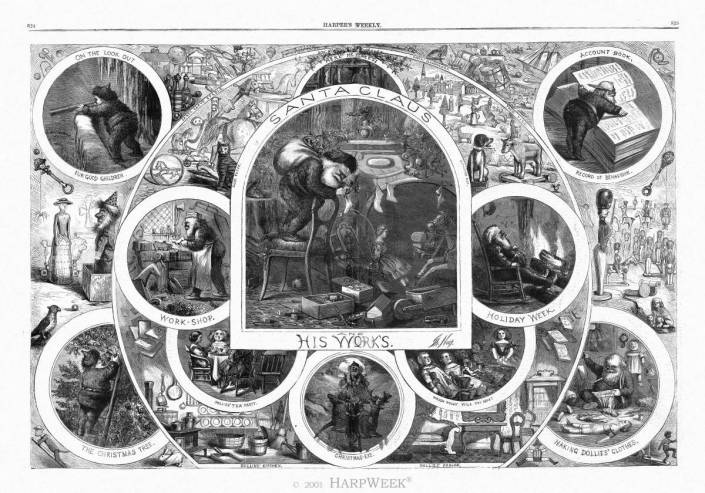 Sundblom went on to have a successful career in advertising art. In the mid 1940’s, shortly after the Santa image appeared, he created a colorized version of the Quaker Oats man, an image which still exists today, although it’s look has since been modernized.

Santa Claus, however, is still considered Sundblom’s most enduring figure.

And a “figure,” so to speak, was Sundblom’s specialty.

That’s because before he became associated with the holidays, Sundblom’s contracted work was in pin-ups, which featured detailed drawings of scantily clad women for magazine pull-outs and calendars. Coca-Cola must have known this at the time, but few made the connection. Then in 1972 at the age of 73, in what turned out to be his last assignment, Sundblom paid homage to both worlds.

That year, he was asked to draw a picture for the cover of the Playboy Christmas issue.

Typical of his pin-up work, Sundblom’s model is seen playfully removing an article of clothing.

This time, it was a familiar red coat.