Lefty Leonardo and the Foretelling Symbolism of ‘The Last Supper’

In Leonardo da Vinci’s 15th century masterpiece, “The Last Supper,” among the artist’s  many symbolic intentions was in the portrayal of Judas.

In the painting, Judas is seen turning his head away and reaching for the same dish as Jesus; a gesture that was seen as an emblematic sign of a thief.  Other depictions also showed this manifestation, but in da Vinci’s work, Judas uses his left hand, rather than the right, to foretell Christ’s fate.

Judas is seated to Jesus’ right so it seems only natural to reach with the closest hand (in the case the left). But as art historians claim, da Vinci may have had more in mind.  That’s because at the time being left-handed was seen as a curse; more fearful and suspicious, rather than enduring. 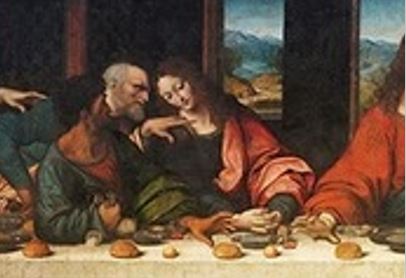 On top of that, da Vinci was also left-handed. Therefore, the speculation in theory at least is credible. Did da Vinci purposely paint Judas reaching with his left hand, signifying perhaps that the man who betrayed Jesus was a “cursed” lefty? As with anything so subjective, especially in regards to an artist intent, only the artist truly knows. So that answer left, as Da Vinci did, nearly five centuries ago.

As for the “curse” claim, however, the history of Christianity seems to back it up. In the church, left-handiness was a sign of bad luck, citing Roman auguries, where a bird or other object sitting on the left side of a priest was an indication of evil things to come.

For centuries, the right hand preference was encouraged or strictly enforced. Men fished and would plough fields with their right hand, lest they burden their families with famine. And a mother teaching her baby to eat would only let the right hand stick out of the child’s swaddled clothing. “If they put forth their left hand,” the early Greek biographer Plutarch (45 A.D.) one wrote, “they were corrected.”

Today an estimated 10-percent of the world’s population is born left-handed and many become noteworthy because of it. Da Vinci in particular certainly endured the backlash. Perhaps he dared to mock his own affliction by portraying Christ’s betrayer as a dreaded “southpaw,” all the while creating it with a brush stroke from his chosen left hand.