In the 1930’s, as the story goes, the Llewellyn setter known as “Jim the Wonder Dog” correctly picked the winner of seven Kentucky Derby’s in a row.

Yes, that’s seven winners – all in a row.

If true, the predictions are quite impressive considering that between 1930 and 1936, while there were two favorites who won (Gallant Fox ’30 and Twenty Grand ’31), there were also two long shot winners: 1933’s Broker’s Tip went off at 8-1 and Bold Venture in 1936 crossed the finish line first at a whopping 20-1.

Jim the Wonder Dog apparently picked them all.

Here’s how it all went down: Jim’s owner Sam VanArsdale would set down sealed envelopes each containing the name of a horse in the race. Jim would walk up to one and put his paw on it. The envelope was then stored in a safe. After the race, the envelope was reopened revealing the winning horse each time. The soft spoken VanArsdale never wanted to profit off his prized pooch so he turned down all offers to reveal the contents of the envelopes before the race.

According to VanArsdale, Jim’s unusual abilities began at an early age. One day, while out in the field hunting, VanArsdale found that Jim could understand what he was saying to him. “Let’s go over and rest a bit under that hickory tree,” VanArsdale would say and Jim would go to the hickory tree bypassing all the other oaks, walnuts and cedars in the woods. When VanArsdale asked Jim to go to the walnut tree, Jim went directly to the walnut.

What this all meant was confounding. Dogs follow commands all the time and through mostly recognizable sounds. But Jim seemed to understand the sound and the word. Apparently, Jim was able to understand commands in any language including Morse code.

Then his psychic abilities kicked in.  Jim was credited with accurately guessing the gender of babies before they were born.

The Kentucky Derby predictions certainly got attention and Jim was asked to pick the winner of the 1936 World Series. Jim choose the New York Yankees to beat the Detroit Tigers (The Yankees were favored and won in six games). After that and thanks to the press coverage, Jim became instantly famous. Even Ripley’s Believe it or Not picked up on his story.

Was it all a hoax as many questioned? Doubters were aplenty, but VanArsdale insisted it was no trick.

“Scientists examined Jim and college classes in psychology observed him without being able to suggest an explanation,” the St. Louis Post-Dispatch wrote, in March of 1937, shortly after Jim died at the age of twelve. “VanArsdale as always denied he has no signals and nobody ever caught him at it.”

The papers pointed out that VanArsdale refused all offers to commercialize the dog and go on the vaudeville circuit.

Jim was buried in a special constructed casket near his hometown of Marshall, Missouri. Flowers from all over the country were sent to his graveside and VanArsdale claims to have received 500 letters of condolence.  In one last fitting testament to Jim’s psychic abilities, when asked if he thought his dog had a form of mental telepathy, VanArsdale humbly replied that “he did not know.”

In 1999, sixty-two years after his death, a park was built in Marshall near the hotel boarding room Jim shared with VanArsdale.

That same year, a statue of Jim The Wonder Dog was dedicated in the park’s gardens. 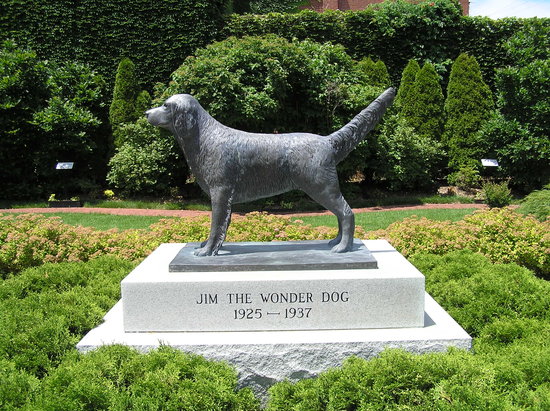