How a Horse Jockey Inspired the Song ‘Yankee Doodle Dandy’

In 1904, actor, singer, songwriter George M. Cohan, an avid baseball fan, was checking the latest scores in the newspaper when he came across the story of an American horse jockey who was winning big races in England.

Tod Sloan, a kid from rural Indiana, was flourishing on the British turf thanks to a radical forward leaning crouch, an old quarter horse stance, which Sloan did not invent, but perfected.

Cohan had an idea.

He wrote a musical based loosely on Sloan’s racing success and reputed playboy lifestyle. 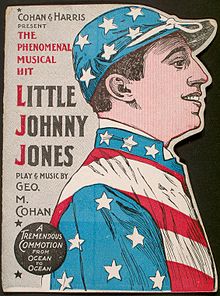 The critics were kind. “It is action and life from start to finish,” raved one reviewer. Cohan had a crowd pleaser for sure, But one song seemed to resonate more than others.

Known affectionately as the “Yankee Doodle Comedian” thanks to being born on July 4th (1878), Cohen was actually born the previous day, but his father, a rabid flag-waver, fudged on the date. Cohan embraced the patriotic connotation and rarely corrected those who questioned it. He wrote the song “Yankee Doodle Boy” for the Johnny Jones character, but clearly with an autobiographical bent.

“A real life nephew of my Uncle Sam’s.” the song went, “Born on the Fourth of July.”

Many years later in 1942, James Cagney played Cohan in a movie about making a musical. Cagney made the song immortal by dancing and singing an even more patriotic version called “Yankee Doodle Dandy.”