In 1945, after serving in the Navy in World War II, Raymond Weeks returned to his family in Birmingham, Alabama and envisioned a national holiday that would honor war veterans. He picked a day, November 11, a date traditionally designated as Armistice Day marking the end of World War I on the “the 11th hour of the 11th day of the 11th month of the year.”

Weeks felt the day should be set aside to honor all veterans of all wars.

So the next year he wrote a letter and  personally delivered his petition for  a “National Veterans Day 1947” to then Army Chief of Staff, General Dwight Eisenhower.

Because of Weeks’ unrelenting commitment to honor those who bravely served the United States during times of war, the first “Veterans Day” event was held on November 11th 1947 in Birmingham.

In 1954, President Eisenhower officially changed the designation of Armistice Day when he signed a bill which made Veterans Day, November 11th, a federal holiday. The bill was proposed by U.S. Representative Edward Rees of Kansas.

For 38 years after that, Weeks, dubbed the “Father of Veterans Day,” served his hometown of Birmingham as Director of the National Veterans Day Celebration.

Then on November 11, 1982, President Ronald Reagan presented Weeks with the Presidential Citizens Medal.

The President described Weeks as a person who “…devoted his life to serving others, his community, the American veteran, and his nation.”

He added: “So let us go forth from here, having learned the lessons of history, confident in the strength of our system, and anxious to pursue every avenue toward peace. And on this Veterans Day, we will remember and be firm in our commitment to peace, and those who died in defense of our freedom will not have died in vain.” 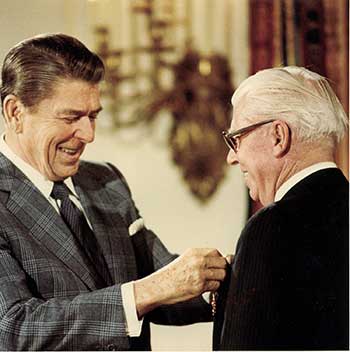