Oh-lee-o-lay-dee: Gene Autry’s Other Christmas Song is One You Probably Know 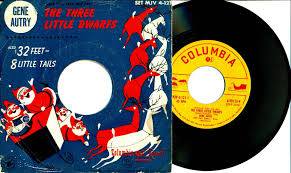 In 1951, cowboy crooner Gene Autry released a song titled “The Three Little Dwarfs,” that playfully told the story of three “helpers” trusted by Santa to “drive” his sleigh on Christmas Eve.

The song was written by Stuart Hamblen, a singer, songwriter and politician who ran for President of the United States in 1952 on the Prohibition Party ticket.  “A cowboy singer, former racehorse owner and converted alcoholic,” Time magazine wrote that year about  Hamblen who picked up 73,000 votes, second most by a third party candidate.

Before politics, the Texas born Hamblen was known for being one of the first singing cowboys and in the 1930’s hosted a popular radio show called “Family Album.”

Hamblen wrote several hits for country radio but nothing quite as enduring as “The Three Little Dwarfs.”

The most famous singing cowboy, Gene Autry recorded the song and released it as a single with a B side tune titled “32 feet – 8 Little Tails.” In December 1951, Columbia Records ran an ad in Billboard listing the label’s “best sellers.” Autry’s “The Three Little Dwarfs” was listed just ahead of his version of “Rudolph the Red Nosed Reindeer.”

Today, Autry’s version of “Rudolph” is considered a holiday staple, while “The Three Little Dwarfs” is mostly forgotten.

The song itself however is not.

It was immortalized in a two-minute stop-animation cartoon titled “The Three Little Dwarfs,” but more commonly known as “Hardrock , Coco and Joe.”

Donner and Blitzen, away, away

The short premiered  on Chicago’s WGN-TV on Christmas Eve 1956.

Autry’s song was not the one used in the short. The tune was re-recorded and reworked. For instance, a narrator is used to speak some of words rather than sing them.

But the most recognizable difference was in Joe’s line. In Autry’s rendition, Joe is sung in a high-pitched voice rather than the distinctive and memorable deep bass of “I’m Joe” featured in the animated version.