In September of 1977, British model and actress Twiggy appeared with Bing Crosby at the taping of the popular singer’s annual Christmas special. That year, the family holiday staple was being filmed overseas because the 74-year-old Crosby happened to be in Great Britain at the time for a concert tour. Crosby recruited several British entertainers as guests on the special titled “Christmas in England.” Twiggy was one.

Considered the “face of the 60’s” with a rail thin figure, short hair and strikingly large eyes, the teenage Twiggy was arguably the most recognized model in the world. Now a decade later, and in her 20’s, Twiggy was a multi-talented performer who picked up two Golden Globes for her work in The Boy Friend, a movie based on a musical set in the 1920’s about a theater group in England whose stage manager Polly (played by Twiggy) gets her big break when the leading lady literally “breaks a leg.”

In the Christmas special, Twiggy and Crosby sing a tender version of “Have Yourself a Merry Little Christmas.” Twiggy is refined, relaxed and clearly star struck. Crosby takes the lead on the song but the two trade verses and sing portions of the chorus together. Twiggy also appears in a sketch with Crosby and British actor Ron Moody, best known for his role as Fagin in the movie Oliver. 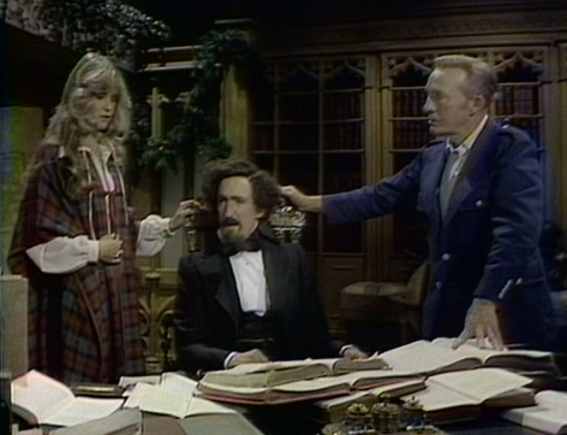 When the show was broadcast later that year, viewers watched with a heavy heart.  Only a month after filming, in October, Crosby died from an apparent heart attack. The posthumously aired British-themed Christmas special would be his last.

In retrospect, Twiggy’s duet with Crosby is a bittersweet rendition of a spirited holiday standard, done with class and professionalism, a trademark of Crosby with any singer. But it’s forgotten today. However, another well-known British star – and an even more unlikely choice than Twiggy – would make a mark on the show that would last for years to come.

Glam rocker David Bowie initially turned down the request to be a guest because he didn’t like the song choice: “The Little Drummer Boy.” He eventually agreed to appear after Crosby’s musical arrangers wrote a new part of the song for him to sing, titled “Peace on Earth,” which he liked.

Peace on Earth, can it be
Years from now, perhaps we’ll see
See the day of glory
See the day, when men of good will
Live in peace, live in peace again

The two voices soared together. “Ah, that’s a pretty thing, isn’t it?” Crosby said after they finished the song.

One thought on “Twiggy’s Christmas Turn”

David Bowie and Bing Crosby? Sounds crazy now, but I did listen to the song and it was great. Thank you for sharing!