The Invasion of the “Body Snatchers”

In the new book Hero of the Empire, author Candice Millard explores the military career of a young Winston Churchill and the future Prime Minister of England’s exploits in the Boers War, a devastating conflict against the fiercely independent South African Republic of Transvall, or Boers, that’s as much a part of British history as the two subsequent World Wars.

In 1899, Churchill was in his twenties and officially not a soldier, per se, but a correspondent for the Morning Post.  However, he bravely and willingly fought alongside his fellow countrymen. When a British armored train was ambushed, Churchill fought back, was captured, imprisoned, managed to escape, and traversed hundreds of miles of enemy territory to freedom. He then returned and resumed his duties in the war. Millard’s expert narrative paints the young Churchill as a man of great strength, determination and steadfast loyalty.

The same attributes can also be applied to another famous figure in history who did not fight like Churchill, but bravely dodged the bullets of the Boers to do a thankless and daring task. His contribution is touched on briefly in the book, but is worth noting here as an example of a man whose legacy of peace and non-violence includes the brutal reality of warfare.

In stark contrast to Churchill’s call to arms, this figure refused to pick up a weapon or engage in hand to hand combat. His Hindu faith prevented that, but his desire for justice could not be suppressed. He was an Indian-born lawyer in a country under the flag of the British Empire who went to South Africa to defend his people from cruelty imposed by the Boers. When war broke out, he wanted to contribute, along with other persecuted Hindu followers. But how?

So he asked the British government if he could put together a team of men to perform the incessant task of removing bodies, dead or wounded, from the heat of battle. The government approved the request, but made it clear that the men were under no obligation or safeguards from the British Army. The decision to risk their own lives in order to save others was theirs and theirs alone.

“Body snatchers,” was the term used by British troops to describe the men who retrieved “not just bodies from the battlefield, they hoped, but young men from the jaws of death,” Millard writes. The “body snatchers” wore wide brim hats and simple loose fitting khaki uniforms and were distinguished by “a white band with a red cross on it wrapped around their left arms.”

Their efforts were lauded by superiors and observers alike. “Anywhere among the shell fire, you could see them kneeling and performing little quick operations that required deftness and steadiness of hand,” wrote John Black Atkins a reporter for the Manchester Guardian.

By now you may discern that the person who assembled this unusual band of brave men is important to history.  Millard doesn’t hold anyone in suspense. She doesn’t need to. The man was Mohandas Karamchand Gandhi, the thirty-one year-old leader of the “body snatchers.”

“Although his convictions would not allow him to fight,” Millard writes, “he had gathered together more than a thousand men to form a corps of stretcher bearers.”

Later in his autobiography, Gandhi would recall his role in the Boers War.

“We had no hesitation,” he wrote. 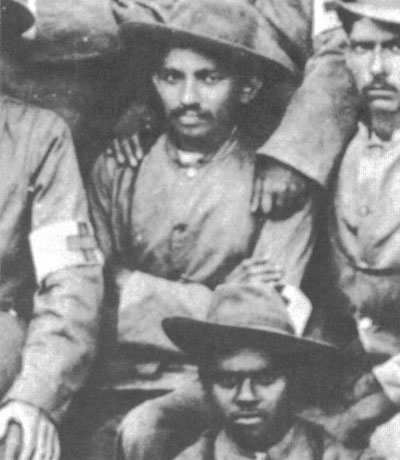 2 thoughts on “The Invasion of the “Body Snatchers””

Greetings
Did Churchill and Gandhi ever meet in south Africa?