When the President Ordered Thanksgiving One Week Earlier 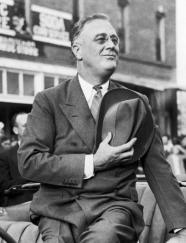 Roosevelt was being pressured to make the change by the National Retail Dry Goods Association. The NRDGA was reeling from the Great Depression and sensed a disaster in holiday sales since Thursday of that year fell on the 30th, the fifth week and final day of November, and late for the start of the Christmas shopping season.

The business owners went to Commerce Secretary Harry Hopkins who went to the President. Help out the retailers, Hopkins pleaded. Roosevelt listened. He was trying to save the economy not break it. Thanksgiving would be celebrated one week earlier, he announced.

Apparently, the move was within his presidential powers to suggest since no precedent was set. Thanksgiving, the day, was not federally mandated and the actual date had been moved before. Many states, however, balked at Roosevelt’s plan.  Schools had a scheduled day off for the last Thursday of the month and a host of other events like football games, both at the local and college level, would have to be cancelled or moved. One irate coach threatened to vote “Republican” if Roosevelt interfered with his team’s schedule.

Others at the government level were similarly upset. “Merchants or no merchants, I see no reason for changing it,” chirped an official from the opposing state of Massachusetts. In jest, Atlantic City Mayor Thomas Taggart, a Republican, dubbed the early date, “Franksgiving.”

However, Illinois Governor Henry Horner echoed the sentiments of those who may not have agreed with the switch, but dutifully followed orders. “I shall issue a formal proclamation fixing the date of Thanksgiving hoping there will be uniformity in the observance of that important day,” he declared. Horner was a Democrat and across the country opinions about the change were similarly split down party lines: 22 states were for it; 23 against and 3 went with both dates.

It didn’t matter to Roosevelt at first. He made the change official for the succeeding two years, since Thursday would fall late in the calendar both times. But in 1941, The Wall Street Journal released data that showed there was little to no significant change in retail sales.

Roosevelt admitted he was wrong, but in hindsight, on the right track. Thanks to the uproar, later that year, Congress approved a joint resolution making Thanksgiving a federal holiday to be held on the fourth Thursday of the month, regardless of how many weeks were in November.

Roosevelt signed it into law.