In a scene from the movie musical  “The Greatest Showman,” Hugh Jackman as P.T. Barnum proclaims that he doesn’t need a building to put on a show, “All we need is a tent,” he says. The scene seems to suggest that Barnum came up with the idea of using a tent to house a circus-type show. Fair enough, especially for a dramatized movie script, but not entirely true.

While Barnum eventually did use tents to put on a show, the idea to stage circus acts under a temporary shelter actually dates back to 1825 by a man named J. Purdy Brown who used small canvas tents for shows. Although Brown doesn’t get much recognition, the canvas-covering stage idea, then a one-ring circus act, was a revolutionary one.

Eventually in the 1870’s, Barnum took his “Greatest Show on Earth” on the road traveling by train and setting up very large tents which became known as the “Top” or the “Big Top” as we know it today.  Under the “Big Top,” there was room enough for three rings. “A crammed company,” as Barnum called it.

So for spectacle and invention at least, like the “three-ring circus,” Barnum gets his due.

Certainly not a household name, St. John (pronounced Sinjin) Terrell was a visionary and showman whose story may not be as fanciful – or as successful –  as Barnum’s, but just as entertaining, especially to his audience.  Only in Terrell’s case, it wasn’t acrobats, fire eaters and elephants that wowed the crowd, but something much more refined.

Terrell was born in Chicago, Illinois in December 1916. He worked in the circus before transitioning into theater. In 1939, he opened the Bucks County Playhouse in New Hope, Pennsylvania  along the banks of the Delaware River. Terrell attracted up and coming Broadway talent who apparently weren’t bothered by the 90-mile distance between the Playhouse and New York City.

But Terrell had something else in mind for his musical theater and like Barnum, all he needed was a tent. The plan was to pitch a tent large enough to fit a stage surrounded by seats. There Terrell could put on shows, mostly operettas, to appreciative audiences.

Inspired by Barnum’s “Big Top”, he would call it “The Music Circus.”

In August 1949, The Music Circus opened in Lambertville, New Jersey, and that’s where it stood for many years.  The 75-foot by 105-foot tent was “square-oblong” in shape and sat 800 people.  The staging was different too. “Terrell is offering theater in the round,” reported the New York Daily News. “instead of the traditional drama on the  half-shell.”

One of the first productions was Noel Coward’s “Bittersweet.” “Once you are used to the absence of scenery and adjusted to being part of the show, it’s a lot of fun,” the Daily News added. “During the love scenes between Wilbur Evans and Dorothy Sandlin, well, they’re quite close.”

Every Christmas, Terrell would play General George Washington in a staging of the famous crossing of the Delaware River at the actual site near Trenton, a tradition he carried on for 25 years. The idea was originally planned as a publicity stunt for the Music Circus in 1952.  “He jokingly mentioned during a speech that George Washington was going to cross the Delaware and word made it to the editor of the local newspaper,” a Trenton historian noted about Terrell’s first mock crossing.  He had no choice but to follow through. 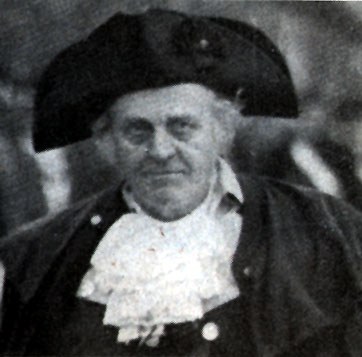 Today in nearby West Amwell Township, New Jersey, a historical sign stands near the original location of the Music Circus. It reads in part: “From 1949 to 1971 many famous film and stage starts got their start in one of the country’s first tent theaters.”

Over the years, the term “music circus” faded. However, variations of the tent idea are still being used by summer stock theater groups throughout the world.

Thank St. John Terrell for that.

3 thoughts on “‘Showman’ St. John Terrell and The Music Circus”

This excellent gent is related to Jay Amberg, another Amika author. Neat!