Before There was Mickey Mouse, There was ‘Oswald the Lucky Rabbit’ 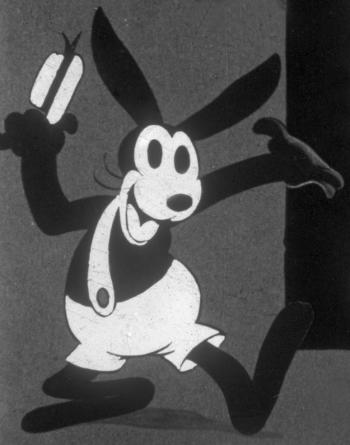 His face was round and his body was rubbery. He was sensitive, but headstrong. He laughed. He cried. For kicks, he could take off his long supple ears and put them back on again.  His name was Oswald the Lucky Rabbit and he was the first major animated character created by a man who would later become – and still is – one of the most enduring public figures of our time.

Walter Elias Disney was just in his twenties when Oswald came along. A gifted graphic artist from the Midwest, Disney had spent some time overseas during World War I as an ambulance driver and returned to the states to work for a commercial arts company in Kansas City, Missouri. Disney had a knack for business. He partnered with a local artist named Ub Iwerks and together they formed their own company, Iwerks –Disney (switching the name from their first choice of Disney- Iwerks  because it sounded too much like a doctor’s office).

They dabbled in animation and soon were making shorts, basically live action films mixed with animated characters. They made a slew of little comedies called Lafflets under the name Laugh-O-Grams. It was a tough sell. Studios backed out of contracts and various offers fell flat.

Disney never gave up and soon they had a series called Alice the Peacemaker based loosely on Lewis Carroll’s Alice in Wonderland. Alice was different and seemingly better.   They used a new technique of animation, more fluid with fewer cuts and longer stretches of action.  Alice, the heroine of the series, was a live person, but the star of the comedies was an animated cat named Julius. The distributor of the Alice shorts, an influential woman named Margret Winkler, had suggested the idea. “Use a cat wherever possible,” she told Disney, “and don’t be afraid to let him do ridiculous things.” Disney and Iwerks let the antics fly, mostly through their furry co-star.

When Alice ran its course and Disney was thinking of another series and character, he wanted it to be an animal. But not a cat, he thought, there were too many feline cartoons. That’s when a rabbit came to mind.

A rabbit he named Oswald. 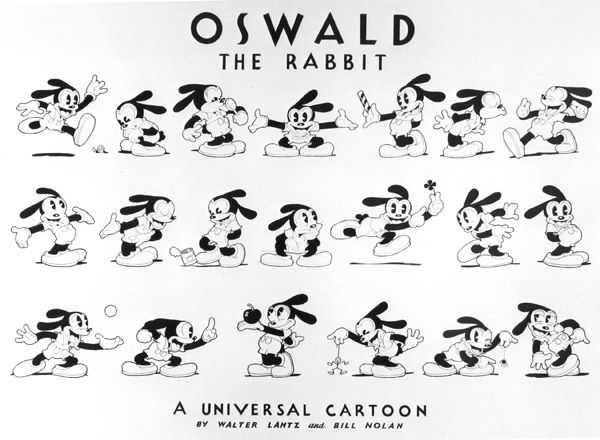 It was a shaky start. The first Oswald short, Proud Papa, was controversial even by today’s standards. In it, Oswald is overwhelmed by an army – or air force, if you will – of storks each carrying a baby bunny and dropping the poor infants one right after the other upon Oswald’s home. He was after all a rabbit and, well, rabbits have a reputation for being prodigious procreators. 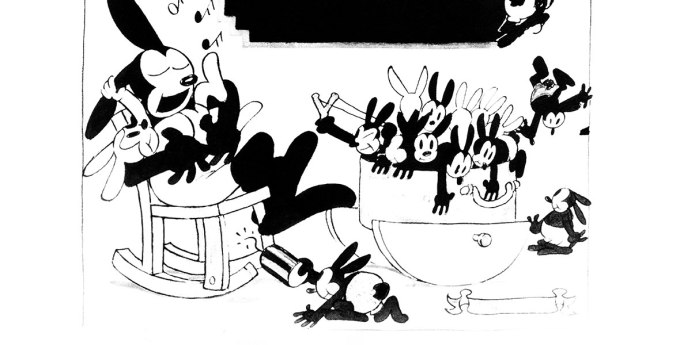 But this onslaught of newborns, hundreds it seemed, was just too much for the budding new father.  Oswald’s frustration turns to anger and soon he brandishes a shotgun and starts shooting the babies, one by one, out of the sky like an arcade game. The storks in turn fire back using the babies as weapons.

Pretty heady stuff even for the 1920’s, but it wasn’t the subject matter that bothered the head of Winkler productions, a man named Charles Mintz.  It was the clunky animation, repetition of action, no storyline, and lack of character development that drew his ire.

Disney and Iwerks went back to work and undertook changes that made Oswald more likable – and funnier.  They made more shorts and audiences began to respond.

Oswald the Lucky Rabbit caught on. Soon, Oswald’s likeness was appearing on candy bars and other novelties.

Disney finally had a hit. But the reality of success was met with sudden disappointment. Walt had signed only a one-year contract, now under the Universal banner, and run by Winkler’s former head Mintz. The contract was up and Mintz played hardball. He wanted to change or move animators to Universal and put the artistic side completely in the hands of the studio. Walt was asked to join up, but refused. He still wanted full control. Seeing an inevitable shift, many of Disney’s loyal animators jumped ship. But Walt’s close friend and partner Ub Iwerks stayed on. Oswald was gone, but the prospects of a new company run exclusively by Walt were at hand.

Under Universal’s rule, Oswald’s popularity waned. Mintz eventually gave the series to cartoonist Walter Lantz who later found success in another popular character, a bird, named Woody Woodpecker. Oswald dragged on for years, as cartoons often do, and was eventually dropped in 1943.

Here’s where it gets better for Walt. In early 1928, Disney was attending meetings in New York when he got word that his contract with Universal would not be renewed and Oswald was no longer his. Although he later said it didn’t bother him, a friend described his mood as that of “a raging lion.”

Disney soon boarded a train and steamed back west determined to carry on.

As the story goes, during the long trip, Disney got out a sketch pad and pencil. He started thinking about a tiny mouse he had once befriended at his old office in Kansas City.

He began to draw a character that looked a lot like Oswald only with shorter rounded ears and a long thin tail. 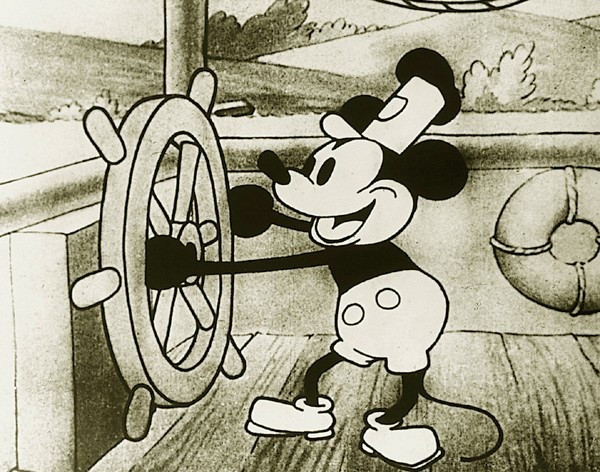