Wash Your Hands? In the 19th Century it was ‘Please Take a Bath’

In 1902, psychologist and chemist, William Thomas Sedgwick released a book titled Principles of Sanitary Science and Public Heath which was a compilation of lectures he gave as a professor of biological sciences at MIT. In it, Sedgwick extolled the virtues of good personal hygiene to keep infectious diseases away. “The absence of dirt,” he urged, “is not merely an aesthetic adornment.”

Basically, he was telling everyone to clean up. In essence, please take a bath.

Sedgwick was onto something. Until then taking a bath, for example, was an option most people chose to ignore. That’s because for centuries, cleanliness was seen as a sign of weakness or impurity. In some ancient religious philosophy’s, being wet, or letting the water touch you, was akin to allowing the devil enter your body. And in other circles, bathing was considered a sign of sexual mischievousness. Queen Isabella of Castile bragged that she took a bath only twice in her life, on her birth day and her wedding night. And Saint Benedict, an English monk who lived a solitary and monastic life, said “bathing shall seldom be permitted.”

Of course that was a long time ago when attitudes were based on god fearing principles, not logic. But even at the turn of the 20th century, personal hygiene was still somewhat taboo.

Sedgwick though wasn’t the first to encourage others to get well by getting clean. Benjamin Franklin, a man of many titles, was also an early advocate of good hygiene habits. 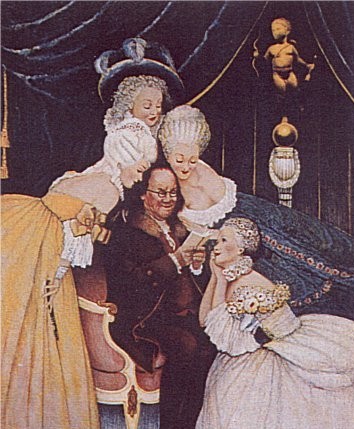 As America’s first diplomat in France, Franklin thoroughly enjoyed the pleasures of taking a bath, a European luxury, although his desires may have been influenced more by the pretty French maids who administered it. “I have never remembered to have seen my grandfather in better health,” William Temple Franklin wrote to a relative. “The warm bath three times a week have made quite a young man out of him [Franklin was in his 70’s at the time]. His pleasing gaiety makes everybody love him, especially the ladies, who permit him always to kiss him.” Regardless of his reasons for actually taking a bath, Franklin couldn’t help but get clean, right?

However, when a large tub of warm water wasn’t present, Franklin liked to take what he called “air baths.” Franklin thought being inside and cooped up in a germ infested, walled, and shuttered space,  was the reason he got colds. So to keep from getting sick, Franklin would open the windows and stand completely naked in front of it.  Ventilation was the key to prevention, he explained, although others likely weren’t so emboldened.

In the mid 19th century, bathtubs were heavy and costly and those who could afford it used it as much for decoration as for its intended purpose.

Before indoor plumbing, a large tub may have been made of sheet lead and anchored in a box the size of a coffin.  Later bathtubs became more portable. Some were made of canvas and folded; others were hidden away and pulled down like a Murphy Bed. They were called “bath saucers.”

It wasn’t that most people didn’t understand the merits of taking a bath. It was just a chore to do so. Water had to be warmed and transported and would chill quickly; then dumped. Oftentimes families would use the same bath water in a pecking order that surely forced the last in line to take a much quicker dip than the first. 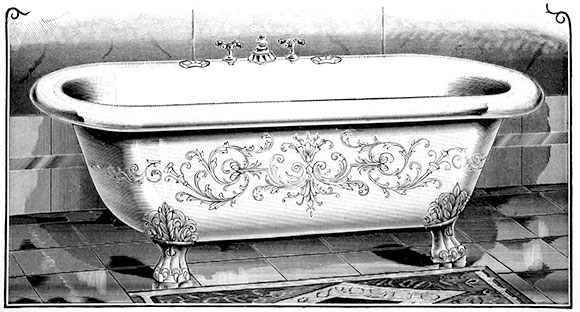 In the later half of the 19th century, as running water became more common, bathtubs became less mobile. Most were still bulky, steel cased and rimmed in cherry or oak, but stationary. Fancy bronzed iron legs held the tub above the floor.

Ads from the time encouraged consumers to think of the tub as something other than just a cleaning vessel. “Why shouldn’t the bathtub be part of the architecture of the house?” the ads asked.  After all, if there is going to be such a large object in the home, it might as well be aesthetically pleasing.

Getting people to actually use it, however, that was another matter.

Sedgwick had medical reasons to back up his claims. As an epidemiologist, he studied diseases caused by poor drinking water and inferior sanitation practices. Good scientific research,  he implied, should be all the proof needed. But attitudes and decades old habits needed to change too. “It follows as a matter of principle,” Sedgwick wrote, “that personal cleanliness is more important than public cleanliness.” He had a point. Largely populated cities were dirty messes, full of billowing black smoke from factories, coal dust, and discarded garbage and waste. Affixing blame for such conditions was more popular than actually doing something about it. Sedgwick focused on self-awareness to make his point.  “A clean body is more important than a clean street,” he stressed.”Sanitation alone cannot hope to effect these changes. They must come from scientific hygiene carefully applied throughout long generations.”

People, it seemed, had to literally be scared into taking a bath.

Something Sedgwick understood, but fought to amend.

“Cleanness,” he wrote in concession, ”was an acquired taste.”