When Soap Was Taxed, Bathing Was Optional, and Dying Was Too Expensive 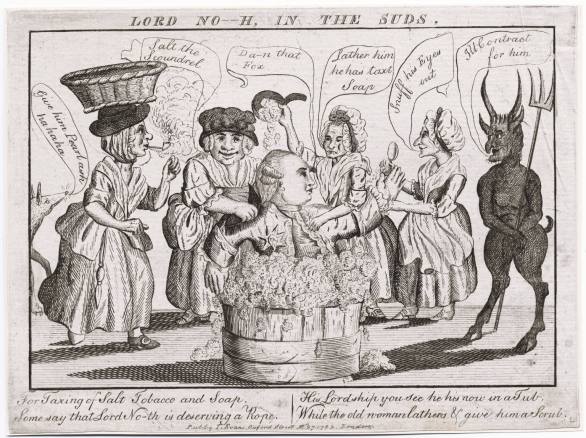 Beginning in 1712 and continuing for nearly 150 years, the British monarchy used soap to raise revenue, specifically by taxing the luxury item. See, at the time, using soap to clean up was considered a vain gesture and available only to the very wealthy. The tax, of course, was on the production of soap and not the participation. But because of the high levy’s imposed, most of the soap makers left the country hoping to find more acceptance and less taxes in the new American colonies.

Cleanliness was not the issue, although it never really was. Soap itself had been around for ages and used for a variety of reasons not necessarily associated with good hygiene. The Gauls, for example, dating back to the 5th Century B.C., made a variation of soap from goat’s tallow and beech ashes. They used it to shiny up their hair, like a pomade.

Even before soap was introduced, rather ingenious ways of cleaning oneself emerged. The Hittites in the 16th century washed their hands with plant ashes dissolved in water. And the Greeks and Romans, who never used soap, would soak in hot baths then beat their bodies with twigs or use an instrument called a strigil, basically a scrapper with a blade, that would scrape away sweat and dirt of the body, similar to what a razor does with hair stubble.

So when actual soap was introduced in the late Middle Ages it had always been considered exclusively for the privileged. Therefore, later when it was mass produced, the British imposed hefty taxes on it as did many other luxury items, like wallpaper, windows and playing cards.

Thank goodness in centuries to follow some common sense emerged.

In 1902, psychologist and chemist, William Thomas Sedgwick released a book titled Principles of Sanitary Science and Public Heath which was a compilation of lectures he gave as a professor of biological sciences at MIT.

In it, Sedgwick extolled the virtues of good personal hygiene to keep infectious diseases away. “The absence of dirt,” he urged with conviction, “is not merely an aesthetic adornment.”

Basically, he was telling everyone to take a bath.

It wasn’t that most people didn’t understand the merits of taking a bath, but it was a chore. Water had to be warmed and transported and would chill quickly. Oftentimes families would use the same water in a pecking order that surely forced the last in line to take a much quicker one than the first. When the baths were over the water had to be lugged outside and dumped.

In the later half of the 19th century, as running water became more widespread, bathtubs became less mobile. Most were still bulky, steel cased and rimmed in cherry or oak. Fancy bronzed iron legs held the tub above the floor.

Ads from the time encouraged consumers to think of the tub as something other than just a cleaning vessel. “Why shouldn’t the bathtub be part of the architecture of the house?” the ads asked.  After all, if there is going to be such a large object in the home, it might as well be aesthetically pleasing.

Getting people to actually use it, however, that was another matter.

Sedgwick had medical reasons to back up his claims. As an epidemiologist, he studied diseases caused by poor drinking water and inferior sanitation practices. Good scientific research,  he implied, should be all the proof needed. But attitudes and decades old habits needed to be amended too. “It follows as a matter of principle,” Sedgwick wrote, “that personal cleanliness is more important than public cleanliness.” He had a point. Largely populated cities were dirty messes, full of billowing black smoke from factories, coal dust, and discarded garbage and waste. Affixing blame for such conditions was more popular than actually doing something about it. Sedgwick focused on self-awareness to make his point.  “A clean body is more important than a clean street,” he stressed.”Sanitation alone cannot hope to effect these changes. They must come from scientific hygiene carefully applied throughout long generations.”

People, it seemed, had to literally be frightened into washing up.

Something Sedgwick understood, but fought to change.

“Cleanness,” he wrote in his book, ”was an acquired taste.”

By this time, soap was being widely used, relatively inexpensive, and no longer taxed in Great Britain. William Ewart Gladstone, the Prime Minister at the time, finally put an end to the soap tax in 1853, nearly a century and a half after it was imposed. In doing so, however, he faced a substantial revenue loss. So to make up for this financial scourge he introduced death duties, basically a tax on the widow of a dead spouse. “This woman by the death of her husband became absolutely penniless,” announced the Common Cause, citing a recurring example.

(Sources: How Did It Begin? The Origins of Our Curious Customs and Superstitions by Dr. R. & L. Brasch; various internet sites)

3 thoughts on “When Soap Was Taxed, Bathing Was Optional, and Dying Was Too Expensive”

Another excellent article! Any desire to trade guest posts?

As of yet I have not traded guest post on my blog. If that should change I’ll let you know. Thanks!

Reblogged this on "Your Dying Charlotte" and commented:
I have decided to occasionally reblog the excellent content of other history blogs. This site, Unremembered, is made of the same cloth as Your Dying Charlotte; to wit: “Let these people and these stories not be forgotten.”