For Roosevelt’s ‘Rough Riders,’ Nothing Beats a Good Smoke

Colonel Theodore Roosevelt didn’t care much for smoking tobacco which is unusual since almost all the men under his command swore allegiance to it. Pipes, cigars, cigarettes or chewing tobacco, didn’t matter as long as they had it. And if they didn’t have it, well now that was a problem too.

The men in reference here are the “Rough Riders,” and thanks to a new book by American West historian Mark Lee Gardner titled Rough Riders:  Teddy Roosevelt , His Cowboy Regiment, and the Immortal Charge Up San Juan Hill, a broader picture emerges of these men who in the summer of 1898 famously followed their fearless, toothy-grinned, bespectacled leader to Cuba to fight in the Spanish-American War.

One thing that stands out, besides the lack of war experience at first, was their love of a good smoke.

Gardner cites the writings of war correspondent Richard Harding Davis of the New York Herald. Davis had turned down a commissioned offer to serve, a privilege, since Roosevelt’s diverse group included career men, Ivy League graduates, and experienced horse riders, or the so-called “cowboys” from the west. Most men volunteered but it was more like a contest than an enlistment; not everyone who signed up got to go. Davis had the chance to fight, but chose to write about the war instead. This however tormented him so that during the engagements he carried a sidearm “just in case.” And when the situation presented itself, Gardner relates, “[Davis] borrowed a Krag (revolver) and joined in the final charge.”

Davis’ most important job, however, was to tell the story and Roosevelt gave journalists, especially his friends, full access. Later detailing every aspect of battlefield life from a soldier’s perspective, Davis described one thing that seemed to be the biggest morale booster of all: tobacco. “With a pipe the soldier can kill hunger, he can forget that he is wet and exhausted and sick with the heat, he can steady his nerves against the roof of bullets when they pass continually overhead,” Davis wrote.

Gardner points out that there were four agonizing days when no tobacco was in the camp. Likely replacement supplies hadn’t arrived yet from the Cuban port city Siboney where American forces came ashore and supply ships were docked. By this point, the men were hopelessly addicted and each day without tobacco was another day of torture. “They got headaches, became nervous, and couldn’t sleep.” Gardner writes.

Tobacco, however, was not a ration. The men had to pay for the privilege. When a shipment arrived there was “as much excitement in the ranks as when they had charged the San Juan trenches,” Gardner notes. When it seemed like some men would have to do without, one of the Ivy Leaguer’s would step in and offer to pay for the lot, about 85 dollars total, to keep others from suffering.

Smoking helped relieve tension too. When Captain Buckey O’Neill, an experienced frontier lawman from Arizona, noticed some uneasiness in the troops, he calmly walked in front of the crouching men smoking a cigarette.  Despite their admiration for such courage, O’Neill, who was hoping to settle the men’s fears by example, was tempting his own fate. “Captain, a bullet is going to hit you” the men shouted from the trenches. O’Neill took a long draw of smoke. “The Spanish bullet isn’t made that will kill me,” he boldly proclaimed. Shortly after, a sharp crack was heard. “Like the snapping of a twig,” Gardner described. It was O’Neill’s teeth breaking. A bullet had entered his mouth and traveled through his head, killing him instantly.

“He never even moaned,” a trooper noted.

Most soldiers though had the good sense to wait until the battle was over before lighting up. It was during this downtime – the time in between the bloody skirmishes – that the cravings hit the hardest.

Even Davis in a letter to his father admitted that smoking was an important diversion and one he personally endorsed.  “I have to confess that I never knew how well off I was until I got to smoking Durham tobacco,” he wrote.“And I’ve only got a half bag left.”

Some soldiers were so desperate, Davis noted, that they made their own tobacco out of “grass, roots, tea and dried horse droppings.”

Davis graciously doesn’t expound on how that might have tasted. 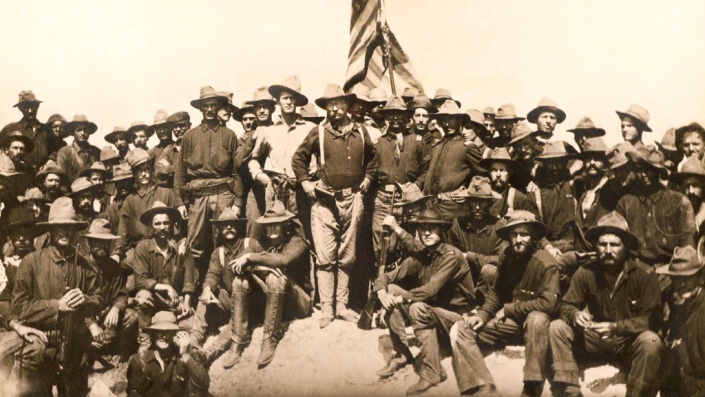