Johnny Aitken, the Brick Test, and the First Indy 500

On September 11 1909, at the Speedway in Indianapolis, race car driver Johnny Aitken hopped into his six-cylinder National motor vehicle, the same one he used to break speed and distance records, and gave the engine a go.  Like a shot, he drove over several hundred yards of newly laid bricks.

Track officials on hand kept a close eye on the ground, specifically the bricks, which were being considered as a possible replacement for the original “crushed stone” surface. Ever since the track opened earlier that year, the stones, gravel really, was proving to be costly – not only in maintenance, but in lives too.

Just a month before on Aug 9, the first long distance car race took place over the oval track. It was a disaster. A driver’s mechanic who rode shotgun during the race was killed along with two spectators. The race was scheduled for 300 miles, but was mercifully stopped at 235 miles. The drivers and their machines were not the issue. The problem was the track. The stones were too rough and loose.  The frequent tire blow outs and debris thrown in driver’s faces led to dangerous and deadly results. The unfortunate victims that day may have been the latest, but certainly not the first, fatalities at the track. Something needed to change.

But what would work?

The National Paving Brick Manufactures Association chimed in. They pitched their product as sturdy and reliable even under racing conditions. But their persuasive bias alone wasn’t enough. It was a costly venture, so track officials needed to see it for themselves. They had crews set down a few hundred yards of bricks and they asked one of the local drivers to help. Run over it, they instructed. Johnny Aitken happily obliged.

Aitken, nicknamed “Happy,” was an Indianapolis native who began testing cars at the National Motor Vehicle Company before racing them full-time with all the derring-do he could muster. Aitken was pretty darn good at driving. He won a few sanctioned races, set speed records for distance and supported another Indiana man, a bicyclist turned car aficionado named Carl Fisher, who used profits from a compressed gas headlight he invented to help finance, along with a few other money men, a showcase track built over farmland in Aitken’s hometown. He called it the Indianapolis Motor Speedway.

Fisher, now track president, was not in attendance when Aitken tested the new bricks, but was eagerly awaiting word. Although resistant at first, since attendance numbers went up after races where someone was killed, Fisher knew that the new sport needed its “heroes” alive, not dead. The newspaper’s reporting, however, was typically less sympathetic and more flippant. “The [killings] only served to increase the excitement,” the Indianapolis News enthused after a driver and his mechanic where thrown from their vehicle to their deaths.  The next racing day, the News observed: “There were more women in the crowd…and they appeared to be the most interested spectators.”

Fisher read the papers, heard the outcries from critics, and could no longer ignore the truth. The track was unsafe. He considered changing to a concrete surface at first, before deciding on bricks. However, they would have to be subject to vigorous scrutiny, he insisted, before opening his pocketbook.

After the initial run over the brick surface, Aitken turned his vehicle around and did the same thing again. About a dozen or so track employees waved off the dust and smoke and immediately inspected the bricks for damage. There was none. The next test, however, would be even more revealing.

This time Aitken positioned his vehicle directly on the bricks.  Two heavy duty ropes were tied to the front of each tire and secured to a couple posts held firmly by a concrete base. Aitken got the signal and gunned the engine. The tires spun wildly in place creating a massive smoke cloud, but little else. When it was over, not one brick was missing; not a chip out of place. That sealed it. The project was given the go ahead. The bricks would cover the full two-and a half mile track.

Fisher promised the bricks would be installed in two weeks, a gross miscalculation. He even scheduled an air and dirigible show on the grounds just to keep interest up, but when work on the track and new grandstands took longer than anticipated, he was forced to cancel the event. The overall cost of the brick installation ballooned to $700,000 nearly triple the amount Fisher originally budgeted.

On May 30, 1911,  a Tuesday, driver Ray Harroun in a Marmon Wasp won the inaugural Indianapolis 500 with an average speed of just over 74 mph. Or did he? Historians still debate who actually finished the six-hour race first. Another driver Ralph Mulford claimed he was ahead of Harroun at the end, but lost count and went an extra “insurance” lap just to be sure. By the time he crossed the finish line for the second time, Harroun was already celebrating.

Regardless of who actually won the race, nearly 80-thousand enthusiastic fans cheered the drivers on to the very end. “They had seen their hands weaken on the steering wheel,” the Indianapolis Star reported. “They had seen their drawn faces filled with anguish of intense hardship, and time after time they had seen them risk their lives in the speed arena”  As for Harroun’s apparent victory: “There were but four tire changes,”  the winning vehicle’s manufacturer boasted the next day.  The bricks, they subtlety implied, made the difference. “Three of the original ‘Firestone’ tires finished the race.” The track later picked up the moniker, “Brickyard.”

But there was a tragedy. Sam Dickson, a mechanic for the car driven by Arthur Greiner, never made it home. When Greiner’s car lost a tire and ran off the course it looked like it might somersault through the infield’s tall meadow grass. Instead it came to a sudden and horrifying halt. “Rather than keep going,” wrote author Charles Leerhsen, “the car stopped in mid-maneuver, so that it stood straight up, balancing for a moment on its steaming grille.”  Then it slowly flopped forward. Greiner was lucky, he was chucked from the cockpit and survived, but Dickson never left his seat and was crushed under the vehicle’s weight. The race was never stopped.

Johnny Aiken also participated in the first Indy 500. He completed 125 laps before a broken connecting rod ended his day.

He did, however, lead the first lap.

Aitken left auto racing in 1917. He worked to promote Peugeot vehicles and even traveled to France during the war to tour their large car making factory. Returning home, he developed “the cough.”  The Spanish Flu epidemic had been spreading quickly overseas. The former race car driver recovered from his initial bout of influenza, but only briefly. Soon enough bronchial pneumonia set in. Aitken died on October 15, 1918. 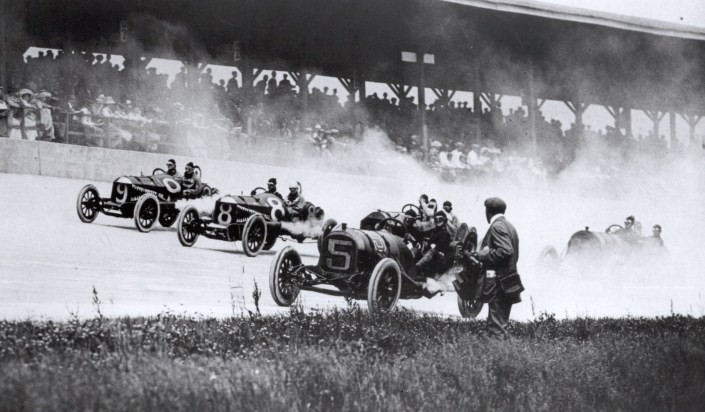 (Sources: Blood and Smoke: A True Tale of Mystery, Mayhem and the Birth of the Indy 500,  Charles Leerhsen; Indianapolis Star May 31, 1911; various internet sites)

The Man Who Put the Brick in ‘Brickyard’

Carl G. Fisher was a bicycle enthusiast. He built them, he raced them, he even delicately guided one across a tightrope just to prove there versatility. He was nicknamed “Cripple,” or “Crip” for short, because his friends thought he was destined to suffer a permanent injury. As one worrisome acquaintance described: “He frequently, in bursts of speed, took spills and ended up with many bruises and cuts.”

Undeterred, after dusting off, Fisher would try it again.

That was his style.

Born in Greensburg, Indiana in 1874, as a young boy Fisher moved to Indianapolis with his mother after his parents separated. Due to a severe case of astigmatism, he dropped out of school early and worked odd jobs, like a grocery store clerk, to support his family. At age 17, along with his two brothers, Fisher opened a bicycle shop.

With the advent of the automobile, Fisher saw another business opportunity. “I don’t see why an automobile can’t be made to do anything a bicycle can do,” he told a friend. In 1904, Fisher converted his bicycle business into an automobile repair shop. To promote his new venture, he asked a crowd to gather at a downtown Indianapolis building. He then pushed a vehicle off the roof.  The vehicle landed on its tires, still upright. The crowd roared its approval. It was showy and effective, similar in style to a more famously known promotional trickster named P.T. Barnum. Fisher later admitted he deflated the tires so the car wouldn’t bounce.

Despite his knack for self-promotion, Fisher had more serious concerns about the newfangled motor vehicle. First was being able to drive it safely in the dark. He invented a headlight that used compressed gas to light the way. It was a revolutionary idea. Soon, the Fisher-patented lights were being manufactured in plants throughout the Midwest. The process however was not safe for workers. The chemical tanks kept blowing up. “Omaha left at four-thirty,” one wire read announcing the unfortunate closing of another plant. The tanks were eventually lined with asbestos and the blasts stopped. The headlights became the standard and Fisher in turn became a very wealthy man.

With money and power in his hands, Fisher took to the automobile like he did the bicycle – with deering-do. He raced a modified Mohawk on small tracks at fairgrounds in Indiana mostly built with wooden boards. But Fisher wanted more. He wanted more speed. more thrills and more excitement. Inspired by European tracks that had long straightaways and sweeping curves, Fisher suggested a proving ground track in Indianapolis would be beneficial to the automobile industry as a whole, testing the limits of engines and body styles. Plus, the racing would be a hoot too. 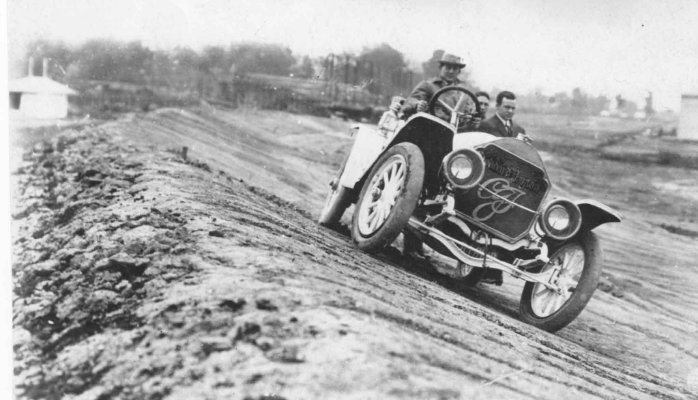 He and other local financiers put up $250,000 in capital to build the track, a two-and a half mile oval, that became known as the Indianapolis Motor Speedway.  On Aug 9 1909, the first car races took place. It was a disaster. Six drivers were killed along with two spectators. The race was scheduled for 300 miles, but Fisher mercifully stopped it at 235 miles. The drivers and their machines, Fisher explained, were not the issue. The problem was the track, made of crushed stone, was too rough.  The frequent tire blow outs led to disastrous and deadly results.  Fisher had to make a change.

He recommended they pave the tracks with bricks instead. But it was costly. So he convinced his investors to help pay for it. Over 3-million bricks were laid. On Memorial Day 1911,  the first 500-mile race was run. Driver Ray Harroun in a vehicle named “Wasp” won the inaugural contest with an average speed of just over 74 mph. “There were but four tire changes,”  the winning vehicle’s manufacturer boasted the next day. “Three of the original tires finished the race.”  The bricks, they subtlety implied, made the difference.

The track later picked up the moniker, “Brickyard.”

Fisher didn’t stop with improvements to racetracks however. He felt everyday drivers were being shortchanged by the lack of public roadways. At the time, most roads were just dirt paths and few went long distances. In 1912, at a dinner party for automobile manufacturers, Fisher unveiled an ambitious plan to build a highway that would span the country, from New York to California. He urged the auto executives to come aboard. Within 30-minutes, he had hundreds of thousands of dollars in support.

Ironically, the one man who refused to contribute was an automobile pioneer from Detroit who thought the automakers should stick to making automobiles, not roads. The government, he explained, should be responsible for that.

His name was Henry Ford.

Thanks to Fisher’s persistence, however, Lincoln Highway (today it’s portions are more formally aligned with the coast-to-coast Interstate 80),  became the first transcontinental highway for motor vehicles.

But Fisher’s testament, such as it is, lie in the bricks. Still a fixture at the track’s finish line.