John Banvard and the ‘Three-Mile Painting’

In the 1840’s, artist John Banvard created the largest, longest and most ambitious painting of its time. Figuratively rather than literally, it was named “Three-Mile Painting” because it consisted of a series of large painted scenes in sequence called a “moving panorama.”

Banvard chose the continuous landscape of the Mississippi River as his subject. He spent two years on the river traveling by boat and hunting for food to survive. He sketched hundreds of scenic vistas from St Louis to New Orleans and when finished holed himself up in Louisville, Kentucky to begin rolling and unrolling canvases. He then transferred the sketches at a breakneck pace.

It was as massive an undertaking as the subject itself.

Each panel stood 12 feet high and together stretched for 1300 feet – not quite a quarter of a mile in total. That was far short of the “three miles” Banvard had advertised, but who was counting?

Banvard presented the work to packed houses and appreciative audiences and in 1846, by request, brought the massive painting to England and Queen Victoria for a private showing in Windsor Castle.

Banvard made a fortune and took his success personally. He fought with fellow panorama artists calling them “imitators” and in return they called Banvard ”uncultivated.” When Banvard built a castle-like estate on 60 acres in New York’s Long Island, it was admonished by locals for being overtly excessive, pretentious and impractical. They called it “Banvard’s Folly.” It later became a lavish hotel.

In 1851, in direct competition with Banvard, another panorama depiction of the Mississippi River was presented by artist John L Egan.  Although it was advertised as a whopping “15,000 feet” in length, a more factual estimate puts it closer to 348 feet.  Each panel was 8- foot high and 14-feet long.  The rolled canvas was so large that matinee viewers were treated to a stroll down the river’s stream in the afternoon while in the evening performance, as the canvas was rolled back in reverse, a trip upstream was presented.

While Banvard claimed to be first to showcase the wonders of the mighty river on canvas, Egan’s deception is better known today because its scenes have been saved, making it the last known surviving panorama of its time.

Unfortunately that is not the case with Banvard’s “Three-Mile Painting.” It was never persevered or copied. Because of its size and quantity, the panels were separated and used as scenery backdrops in opera productions.

When the canvases became worn from exposure they were shredded and recycled for insulation in houses. 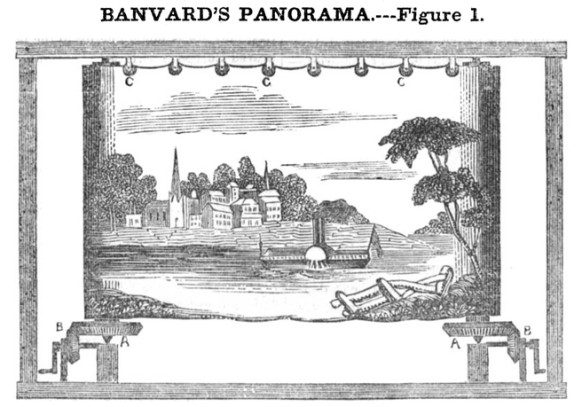