John L. Young was a big deal in the early 20th century. The Atlantic City, New Jersey entrepreneur made lots of money, doled out lots of money, and lived quite comfortably off those who spent their hard earned dollars on his wheeling and dealing.  Call it gumption, not greed. Young was a dreamer and had the fortitude to dream big and be rewarded. It also helped build a truly unique american city and in retrospect the beginning of a uniquely American institution, too.

Born in Absecon, New Jersey in 1853, Young came to Atlantic City as a youthful apprentice looking for work. Adept at carpentry, he helped build things at first including the infamous Lucy the Elephant statue that still greets visitors today.

The labor jobs were steady and the money reasonable, but Young was looking for something more challenging – and prosperous. Soon enough, he befriended a retired baker in town who offered Young a chance to make some real dough. The two men pooled their resources and began operating amusements and carnival games along the boardwalk.  Eventually they were using profits, not savings, to expand their business.

The Applegate Pier was a good start.  They purchased the 600-plus long, two-tiered wooden structure, rehabbed it, and gave it a new name, Ocean Pier, for its proximity to the shoreline. Young built a nine-room Elizabethan- style mansion on the property and fished from the home’s massive open-aired windows.  His daily “casts” became a de facto hit on the Pier. Young would wave to the curious in delight as the huge net was pulled from the depths of the Atlantic and tales of “strange sea creatures below” were told. The crowds dutifully lined up every day to see it. They even gave it a name, “Young’s Big New Haul.”

But Young had even bigger aspirations. He promised to build another pier that would cost “a million dollars.”  In 1907, the appropriately titled “Million Dollar Pier,” along with a cavernous building, like a large convention hall, opened its opulent doors. It was everything Young had said it would be and more, elegantly designed like a castle and reeking of cash.

Young spared no expense right down to the elaborately designed oriental rugs and velvety ceiling to floor drapery. It was the perfect place to host parties, special events and distinguished guests, including President William Howard Taft who typical of his reputation – and size – spent most of the time in the Million’s extended dining hall. “The pier itself was a glorious profusion of pennants, towers, and elongated galleries, wrote Jim, Waltzer of the Atlantic City Weekly. “It attracted stars, statesmen, and, of course, paying customers.” 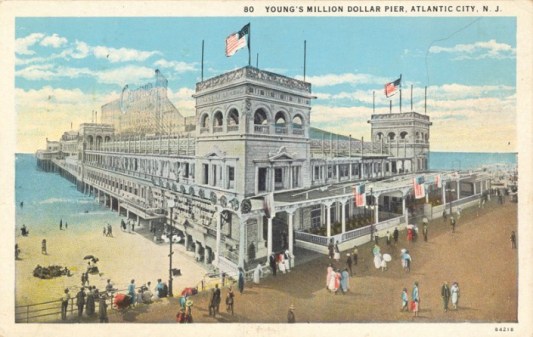 Hotel owners along the boardwalk were pleased. Pricey rooms were always filled to capacity and revenues went up each year. Young had built a showcase of a pier and thousands came every summer to enjoy it.  But every year near the end of August there was a foreboding sense that old man winter would soon shut down the piers – and profits.

There was nothing business leaders could do about the seasonal weather. In fact, the beginning of fall is typically a lovely time of year on the Jersey Shore. But the start of the school year and Labor Day is traditionally the end of vacation season.  In the early 1920’s, by mid-September, the boardwalk and its establishments would become in essence, a ghost town. Something was needed to keep tourists beyond the busy summer season. 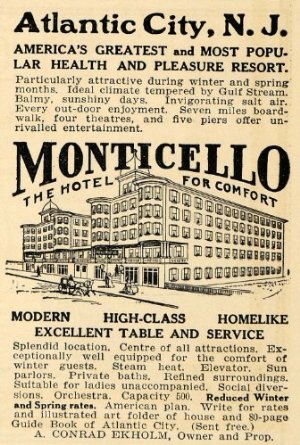 A man named Conrad Eckholm, the owner of the local Monticello Hotel, came up with a plan. He convinced other business owners to invest in a Fall Frolic, a pageant of sorts filled with silly audience participation events like a wheeled wicker chair parade down the street, called the Rolling Chair. It was so popular, someone suggested they go a step further and put a bevy of beautiful young girls in the chairs. Then an even more ingenious proposal came up. Why not make it a beauty or bathing contest?

Immediately the call went out.  Girls were wanted, mostly teenagers and unmarried.  They were to submit pictures and if chosen receive an all-expense paid trip to Atlantic City for a week of lighthearted comporting. The winner would get a “brand new wardrobe,” among other things. The entries poured in and by September of 1921, the inaugural pageant soon to become known as “Miss America” was set.

Typical of his showmanship and style, John Young offered to host the event at the only place which could do the young ladies justice – The Million Dollar Pier.

In Atlantic City today, the Million Dollar Pier, is even gone by name. A newer half-mile long pier still stands but with a new title, it’s third, The Pier Shops at Caesars Atlantic City, an 80-store shopping mall.

The original Million Dollar Pier was demolished in the 1960’s.