John Philip Sousa, known affectionately as the “March King,” not only composed stirring music for marching bands, he helped define it as well. Disappointed by the sound of the standard B-flat bass tuba – the one with the circular bell opening in front – Sousa sought to make it better. “It was all right enough for street-parade work,” Sousa wrote about the front-facing tuba, “but its tone was apt to shoot ahead too prominently and explosively to suit me for concert performances.”

Sousa had an idea. Why not point the bell of the instrument up rather than forward and let the sound resonate over the top of the band instead. So in 1893, a tuba was modified and manufactured to Sousa’s specifications and the Sousaphone, as it was called, was born.

The original Sousaphone was a huge piece of brass. Weighing in at upwards of 30-plus pounds, it’s circular base wrapped around the player’s shoulder at the top and just below the waist at the bottom. The bell would reach skyward some two feet above the player’s head.

Sousa was pleased. He used the Sousaphone exclusively in concerts. At first, trying just one mixed in with the standard tubas, but eventually replaced them all with Sousaphones.

The new tuba was given an appropriate nickname: raincatcher.

Thanks to Sousa’s ingenious design, the new tuba’s stood out in sound and size. And as it turned out, the men who played the “raincatcher” did too.

Whether it was genius ploy by Sousa or just coincidence, at least one Sousaphone player in the band was tall.

In fact, for its time, they were considered very tall.

Herman Conrad was the first to play the Sousaphone. According to sources he stood a whopping “6-foot-6,” although it was more likely 6-foot-4. One ad proclaimed Conrad was a “six foot eight giant!”

When Conrad left the band, John W. Richardson took his place. He was perhaps more accurately listed at “6-foot-6.” Another tubist named William Bell was also reported to be “6-foot-6.”

No one could explain this phenomenon except that Sousa must have had a a little P.T. Barnum-like showmanship in him. Certainly not out of character for a man who loved to entertain the masses outside of music too, specifically baseball, something he enjoyed just as much as conducting.

While on the road and in-between concerts, Sousa would make his band members don uniforms and take the field so he could play exhibition games against local teams. The tall tuba players apparently weren’t so nimble on the ball diamond. During one game, Richardson reached down to grab a grounder and split the back of his trousers. Sousa, who was usually the pitcher on the team, let out a hearty laugh.

Even if it was all in good fun, the tuba player’s height, whether accurate or not, was good marketing for the band. Each had their likeness featured prominently in advertisements, usually standing or holding the Sousaphone. In one rather effective ad, Richardson is seen next to a woman listed as the harpist who is only five-feet tall.  Richardson is holding the Sousaphone upside down. The bell is directly over the woman’s head appearing as though it might swallow her whole. Richardson, by comparison, looks like a giant. 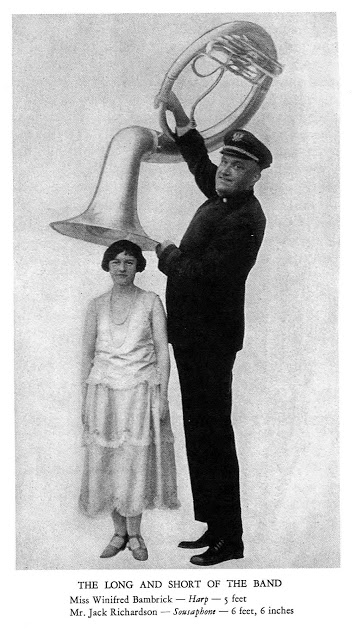 Despite the fanciful publicity, Sousa’s patriotic marches were the biggest draw. “He is the master band leader of them all,” Richardson raved.

In 1911, the string of very tall tubists was broken when Arthur Griswold joined the group. By this time, the towering Sousaphones were a staple in Sousa concerts.

Griswold was listed at 6-foot-2.

Even though he was taller then most of the band members, he was still considered small in size compared to the tuba players who preceded him.

So, in jest, they called him “shorty.” 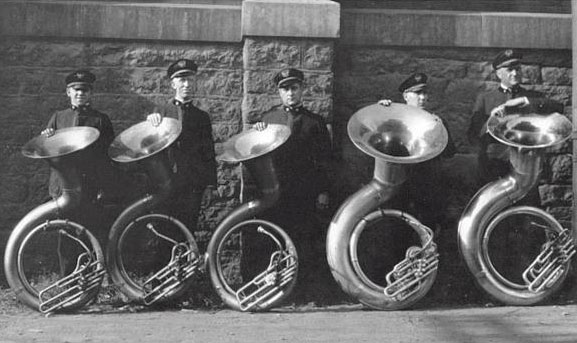