Betsy Ross? For a Long Time No One Knew. Then Her Grandson Told a Story

In 1752, in Philadelphia on New Year’s Day, Elizabeth Griscom was born to a strict Quaker family who emigrated to the United States from England in the late 17th century. A free spirit in her twenties, Elizabeth ran off and met John Ross an upholsterer’s apprentice and an Episcopalian. Her parents forbade the union outside the Quaker faith, but Elizabeth didn’t care. She married John in a ceremony that took place in a tavern and formally became Elizabeth Ross or “Betsy,” for short.

So much so that in contemporary surveys, many people acknowledge the name Betsy Ross more than interminable historical stalwarts like Benjamin Franklin or Christopher Columbus.  However, until her name became synonymous with America’s symbol of freedom, Betsy Ross was a sister, a mother, a widow (three times over), a seamstress, and by the time the rest of the country got to know her – dead for nearly 50 years.

If there was something special about her life, a slice of American folklore, perhaps, she told her family and no one else.

That year, Ross’s last surviving grandson William Canby went before the Historical Society in Philadelphia and told an amazing story about General George Washington, his grandmother and the birth of the American Flag. 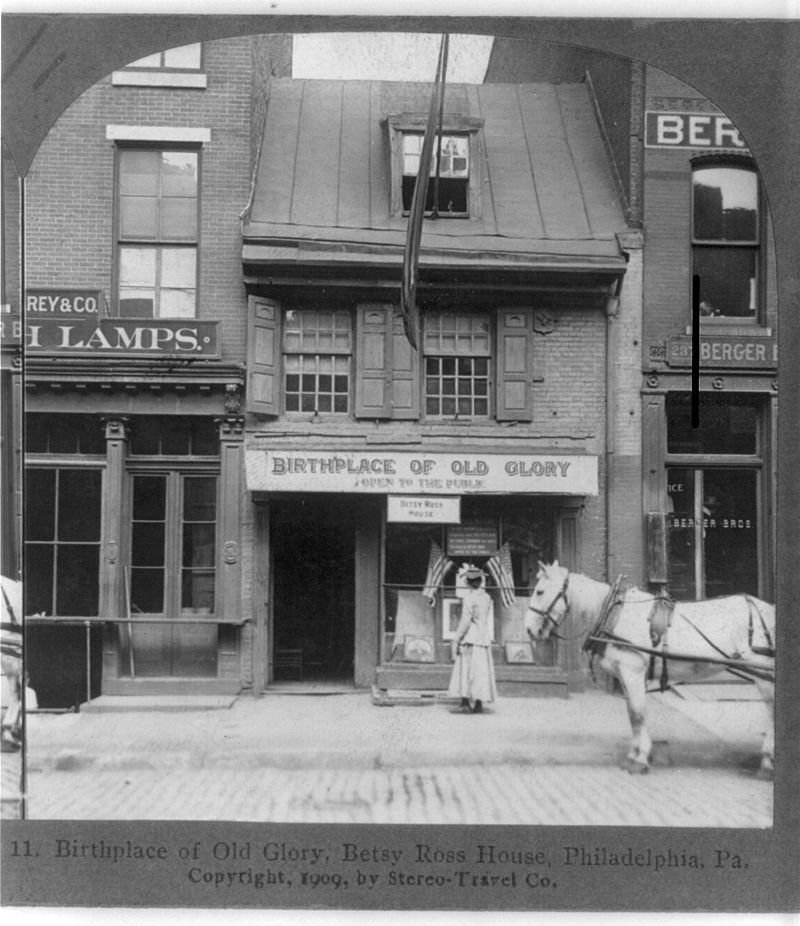 According to Canby, Washington had visited Ross’s upholstery shop in Philadelphia with a sketch idea for a unified flag and asked if Betsy could recreate it. “With her usual modesty and self-reliance,” Canby related, “she did not know, but said she could try.”

Canby says among other revisions, Betsy suggested that the stars be five-pointed rather than six as Washington had proposed (Washington thought the six-pointed star would be easier to replicate). The story was as revealing as it was skeptical. No one had heard of Betsy Ross and previous stories of the first flag was apocryphal at best. There were many nonbelievers and even today historians have doubts. There are no records to support Canby’s claim, they insist, even though Canby had signed affidavits to back up his story.

At the time of Washington’s proposed visit in 1777, Ross would have been in her 20’s. Her life was typical for a young women at the time. She endured two marriages that ended tragically (her first and second husband’s death were both attributed to war.) A third marriage produced five children. She passed away in 1836 at the age of 84.  There is no documentation that she publicly promoted her own role in making of the flag – or was even asked. Apparently only her family knew.

Nearly a century later, however, in the midst of the Reconstruction period, a changing nation embraced Canby’s story of his grandmother and Ross became the face of America’s first flag. The early flag became affectionately known as “The Betsy Ross Flag,” and trinkets of the thirteen stars and stripes were a big seller.

Even hardened critics, who claim many seamstresses may have played a role in the flag’s creation are willing to concede, for history’s sake at least, that one name gets credit for the five-pointed stars.