Baseball’s ‘Pastimes’ Played the Game For Fun Only

In the heart of Brooklyn, in 1858, a group of men known as the Pastimes, hiked up their wool trousers, buttoned-down their flannel shirts, and ran onto an open grassy field to play a game they fondly referred to as “base ball.”

The team was one of several in the New York area, but the Pastimes were different. Instead of being a ragtag lot of patchwork players, the Pastimes billed themselves as more refined and high-minded. Many of the members were prominent citizens, some even held government jobs. They enjoyed spending the day together, socializing and being seen.

Base ball, the game, they said, was just good exercise.

To signify their self-worth, the Pastimes arrived at away games in carriages and usually in a line. “Like a funeral procession passing,” remarked one observer. You couldn’t help but notice.

After the game they invited their rivals, win or lose, to a fancy spread of food and spirits. Oftentimes this was the reason for getting together in the first place. The game was the appetizer. The day’s highlight however was the feast. The opposing players rarely complained.

Despite the revelry off the field, the Pastimes did actually play the game. But it hardly represented what we know baseball to be today. Pitchers tossed the ball (there was no “throwing” allowed) and strikes were rare. With no called balls, a batter could wait through 30 to 40 tosses or more before deciding to hit it. The batter was out when a fielder caught the ball on a fly or on “a bound.”  And player’s running the bases rarely touched them.  After all, who was going to make them? “What jolly fellows they were at the time,” wrote Henry Chadwick, a New York journalist and Pastimes supporter, “one and all of them.”

Most of the early history of baseball hails from New York, with Cooperstown, considered to be the place where the game was invented and the current site of the Baseball Hall Of Fame and Museum, as a prime example. While bat-and-ball type games were popping up throughout the country, in New York, an actual team emerged in the 1840’s calling themselves  the Knickerbockers. While they’re not trailblazers in creating the game, they can be considered pioneers when it comes to the sport. The Knickerbockers actually made and followed some rules.

The play itself was raw, almost comical, but enjoyable for spectators. “Ball Days” became popular, and the Knickerbockers were fun to watch. Soon other teams would join in, some more determined than others. The Pastimes had their reasons too. 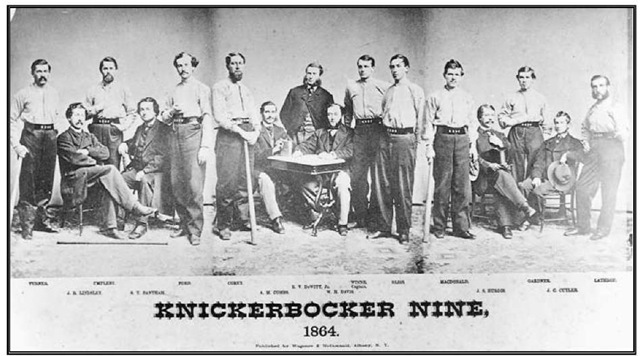 At some point, as more teams participated, the game started changing. It became more challenging and competitive and the Pastimes who had been enjoying a day of friendly raillery – and not much more – had to adjust. “Until the club became ambitious of winning matches and began to sacrifice the original objects of the organization to the desire to strengthen their nine-match playing,” Chadwick wrote, “everything went on swimmingly.” But losing takes its toll. And for the lowly playing Pastimes, the fun went out of the day.  “Finally the spirit of the club, having been dampened by repeated defeats at the hands of stronger nines, gave out,” Chadwick  grumbled on. “The Pastimes went out of existence.”

Well that and the start of the war too.

Conventional wisdom would suggest that the Civil War slowed the progress of the game. And that was true, to a point. Inevitably as men marched off to war, there just weren’t enough players to take the field.  Many top players did heed the call to serve, but others chose to delay their service and keep playing. Plus there were always reserves, especially in a well populated state like New York. The game carried on, despite the conflict. In fact, it was just as popular for the soldiers who shared a good game of nines to help pass the time. “Each regiment had its share of disease and desertion; each had it’s ball-players turned soldiers,” remembered George T Stevens, of the 77th Regiment, New York Volunteers. Baseball was a game that required an open space, a stick, something to hit, and not much else. Reports of ball games in prison camps were widespread.

Once the conflict was over, the game itself was in for an overhaul. Many of the older players were either injured, weary from the war, or worse. That’s when younger players joined in, skills improved, and rules were implemented.

The Pastimes would have never fit in.

Perhaps the most appealing part of the early game would have also pleased the more ardent followers of baseball today, especially those who crave the action on the offensive side of the ball.  On October 28, 1858, the Pastimes played the Newark Adriatics. According to the rules back then, a game played out every half inning, even in the ninth, and even if the home team was winning.

That day, the Adriatics came to bat in the bottom of the ninth.  They were leading 45-13.

The crowd likely cheered them on for more runs. 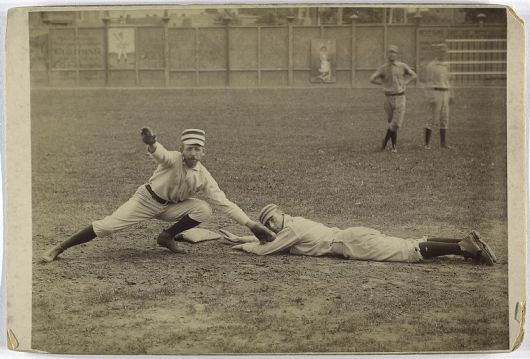