Two Trains, One Track: The Great Train Wreck of 1918 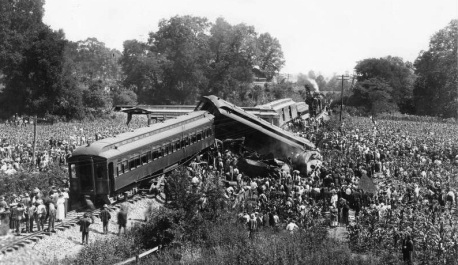 On July 9, 1918, near Nashville, Tennessee, in an area known as Dutchman’s curve, two trains collided head-on creating such a frightful noise that many claimed it could be “heard for miles.”

It was 7:00 on a warm summer morning and both trains on the Nashville, Chattanooga & St Louis line were running late.

The westbound or outbound passenger train to Memphis had just pulled out of Nashville’s Union Station packed with passengers. The eastbound train was heading inbound to the Nashville station from Memphis. Both veteran engineers had orders. The inbound train had the right of way on the curve’s one-way track. The outbound train would have to wait at the double-tracks just outside of the station for the other train to pass. But something went horribly wrong. A green light was given to the outbound train to proceed, meaning someone had seen or heard the incoming train pass. But when the tower operator checked his papers, there was no record of the Nashville-bound train coming through.

In reality, the inbound train was running nearly 35 minutes behind schedule.

The operator frantically telegraphed the dispatcher who immediately sent an urgent message back. “Stop him” was his order. But how?  At the time, there was no direct communication with the engineers in either train. Only a warning whistle was used for emergencies. The whistle blared, but the outbound train was too far along for anyone to hear it. By this time, the inbound train was chugging to the curve.

Both trains were moving at top speeds of 60 mph. Then a moment of sheer terror. The engineer of the outbound train caught a glimpse of the other train coming around the bend, directly in his path. He pulled the emergency brake, but there wasn’t enough time. Then that sound that could be heard for miles. “The ground quaked and the waters of nearby Richland Creek trembled,” one writer later described. “The wooden cars crumbled and hurled sideways, hanging over the embankment.  One train telescoped the other.”

In all, 101 people were killed, mostly traveling soldiers and African-American laborers from Tennessee and Arkansas. Many were leaving or returning to work at a munitions plant in the Nashville area.

Besides what went wrong, there was more scrutiny.

After only a few days of front page news, the press was accused of being mostly dismissive. Perhaps it was due to the number of war stories that filled the papers at the time.  But some believe the wreck itself, while tragic, just wasn’t exploitative enough. Most of the dead were minority migrants and laborers. Many were killed beyond recognition. Basically, it just wasn’t as easily sensationalized as other disasters at the time, like the wrecks involving circus trains…or the fate of a fun-filled chartered steamboat.

Four days before the Nashville train wreck another tragedy hit the papers that shook a nation. On July 5, a wooden steamboat named the Columbia collapsed and sank in middle of the Illinois River near Peoria, Illinois. The 87 dead were mostly women and children enjoying a holiday cruise to a local amusement park.  The survivor stories that followed were stark and dramatic.  “The only thing that kept me afloat,” one woman passenger reported, “were the bodies beneath me.”

The investigation that followed the train wreck, cited human error, specifically blaming the man who could not defend himself, the engineer of the outbound train, David Kennedy.  Only speculation supports the theory that Kennedy mistook a switch engine hauling empty cars for the inbound train. Kennedy was killed instantly in the wreck. A folded “schedule” was reportedly found underneath his body.

The other engineer William Floyd was also killed. He was one day from retirement.

The Nashville wreck to this day is still the deadliest train accident in the history of the U.S.